You work with what you have.

Mastering the latest makeup techniques can be tough. With new products and tools coming out all the time, it’s easy to get overwhelmed with the options.

Well, dipping her toes into the makeup pond for the first time, one eight-year-old girl used something altogether quite unusual for her beauty tutorial. 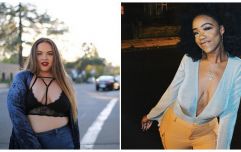 END_OF_DOCUMENT_TOKEN_TO_BE_REPLACED

Yes, filming her makeup regime, this little girl clearly had never seen a pad before but instead of being intimidated, put it to good use.

Finding the footage on her phone, big sister Jaiden Park did what any big sister would do – she posted it on Twitter.

“When your eight-year-old sister makes a makeup tutorial and sees a pad for the first time… what better use?,” reads the caption on the hilarious video that has now gone viral.

When your 8 year old sister makes a makeup tutorial and sees a pad for the first time...what better use?? pic.twitter.com/T7ByMPOqTn

Yes, nearly 60,000 people have shown their apreciation for the video and we can see why.

I can't count how many times I've watched this and it never gets old ????

popular
Ant and Dec open up on their real feelings about the 2022 I'm A Celeb cast
Fundraiser set up for boy attacked by pit bull in Wexford
Kylie Jenner shuts down claims she used her children to cover up for Balenciaga
Why Are Men so Obsessed With Boobs? The Answer is Pretty Surprising...
Fair City star Jenny Dixon shares her twins' gender in sweet video
Jill Scott admits she gave Owen Warner extra food at meal time
The trailer for Channel 4's Vardy V Rooney: A Courtroom Drama has dropped
You may also like
2 months ago
"Home alone" – Prince Louis memes are taking over the internet
3 months ago
Andrew Tate has – finally – been banned from Facebook and Instagram
4 months ago
Sonya Lennon reveals ‘judgement’ her daughter, 17, experienced when buying pregnancy test
4 months ago
Here's how to make Hailey Bieber's TikTok famous Strawberry Glaze Skin Smoothie
5 months ago
Mass in Mayo church goes viral after spooky incident happens over livestream
5 months ago
People on TikTok are making 'healthy Coke' with just two ingredients
Next Page