We love a good gel mani.

When you first have your nails done, you feel super fresh and put together.

That fab autumn-toned colour is bang on trend and there's not a smudge in sight. Brilliant.

They say that they last for two weeks, but you chance it and let it go three... and four... and, we won't even talk about the state they're in now. 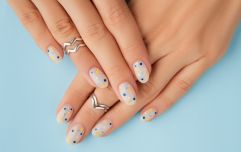 Want to take off your acrylics at home? Here's how you do it

END_OF_DOCUMENT_TOKEN_TO_BE_REPLACED

However, thanks to Marc Jacobs, overgrown manicures are now 'in' (so we're just going to look on trend all the time now, right?).

As part of its New York Fashion Week show, the designer uploaded a few behind the scenes snaps of the catwalk.

Models dolled up to their nines in the expensive gear absolutely took centre stage... however, another thing that everybody noted was the overgrown manis on show.

Now, to be fair, we let ours get a taaad bit worse (Marc's are probably overgrown by one week), but we'd still nail (heh heh) the look either way.

We won't complain though, just means we get a bit more bang for our book the next time we head into a nail salon.