Have you ever looked down at your nails and thought 'I'd just love one of them to have a vagina on it'?

No? Us neither, really. 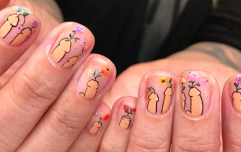 'Dick nail art' is taking over Instagram, and we're kind of loving it?

END_OF_DOCUMENT_TOKEN_TO_BE_REPLACED

But after seeing photos of these manicures featuring little intricate vulvas, we might actually have to rethink a few things.

A salon in the States called Finger Bang (yes) is offering customers the chance to have a stunning teeny vulva painted right onto their nails.

They've shared lots of photos of their "pussy power" inspired designs on their Instagram page and, to be honest, they are actually so impressive.

Asa Bree is a nail artist who works at Finger Bang.

She is also the woman behind the vag nails.

One of Asa's clients, T Ngu, spoke to Buzzfeed about the artist's designs and the reason why she wanted to have a few little vulvas on her nails.

According to her, the nail art is a "statement."

"It's definitely a conversation piece that focuses the light on so many issues," said Ngu.

"From art, women's rights, acceptance, self-love, and learning to love another person for who they are and not what you want them to be." 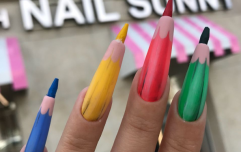 Colouring pencil nails are a thing, and they're SO impractical

END_OF_DOCUMENT_TOKEN_TO_BE_REPLACED

She also added that the vulva was nothing to be ashamed of.

Asa's work has already been liked thousands of times on Instagram, with many users praising her talent and boldness.

Some have branded the manicure "disgusting" but Ngu remains adamant that female body parts are nothing to be embarrassed about.

popular
Hollywood couple Joe Manganiello and Sofia Vergara seen enjoying a Cork chipper
Shirley Ballas books breast exam after Strictly viewers spot lump
You can now apply for tickets to the Late, Late Toy Show
You can now live in the iconic house from Sabrina The Teenage Witch
Weekend break? Here are the 3 best hotels in Northern Ireland right now
Tributes paid to Limerick based blogger and model Patrick McLoughney
Irish TikTokers are telling their dads they paid €50 for 'premium air' in their tyres
You may also like
3 years ago
Expert opinion: these are the 5 hottest nail trends for summer 2018
3 years ago
11 reasons we should all leave nail art to the professionals
3 years ago
Meghan and Harry nail art exists and it's... certainly interesting
3 years ago
This Dublin nail bar is giving away an incredible prize to customers with a polling card
3 years ago
Teeth nail art is now a thing and it's a big fat no from us
3 years ago
People are getting ultrasound scans painted on their nails and alright, yeah OK
Next Page