The Boy From The Woods is due to be published in March - and it has already shot straight to the top of our 'to read' pile.

"Thirty years ago, a child was found in the New Jersey backwoods. He had been living a feral existence, with no memory of how he got there or even who he is. Everyone just calls him Wilde," the description for the book begins.

"Now a former soldier and security expert, he lives off the grid, shunned by the community – until they need him. A child has gone missing. With her family suspecting she’s just playing a disappearing game, nobody seems concerned except for criminal attorney Hester Crimstein.

"She contacts Wilde, asking him to use his unique skills to find the girl. But even he can find no trace of her. One day passes, then a second, then a third.

"On the fourth, a human finger shows up in the mail. And now Wilde knows this is no game. It’s a race against time to save the girl’s life – and expose the town’s dark trove of secrets…" 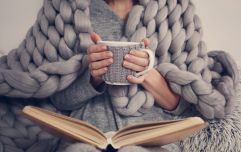 Review: Harlan Coben is better than ever with his new thriller The Boy From The Woods

END_OF_DOCUMENT_TOKEN_TO_BE_REPLACED

Coben is the creator of the crime series The Five, which aired on Sky1 in 2016 and starred Tom Cullen, O.T. Fagbenle, Lee Ingleby and Sarah Solemani.

The actors starred as childhood friends Mark, Danny, Slade, and Pru reunited when DNA evidence left at a murder scene is revealed to be that of Jesse, Mark's younger brother, twenty years after he disappeared while playing in the park with the four friends

He is struggling to connect with his daughters as they still grieve the loss of his wife from cancer one year prior. After his 16-year-old daughter Jenny goes missing, Tom uncovers a web of secrets as he frantically searches for her.

His 2015 novel, The Stranger, was turned into a TV series for Netflix - and has been winning rave reviews ever since it debuted last month.

popular
Curtain bangs are trending - here's everything you need to know
'Beard-baiting' is now apparently a dating trend - and we're all for it
Kate Middleton has addressed the rumours that she's pregnant with her fourth child
Will there be a second season of Gilmore Girls: A Year In The Life? Here's what we know
QUIZ: How well do you really remember the first episode of Sabrina The Teenage Witch?
Cristiano Ronaldo has been called 'racist' for his latest Instagram post
Eight Of The Best Films And Documentaries On 9/11
You may also like
1 month ago
Gone For Good: The next Netflix x Harlan Coben collaboration we're dying to see
4 months ago
Dolly Alderton’s new novel Ghosts has gone straight the top of our ‘to read’ list
4 months ago
13 new books to read with your virtual book club in May
4 months ago
Personality Quiz: Which Twilight character are you?
4 months ago
Daniel Radcliffe has kicked off a celebrity reading of Harry Potter and we're going back to Hogwarts
4 months ago
Stephanie Meyer to publish new Twilight book, Midnight Sun
Next Page