"Always thinking of him."

Vogue Williams has shared a touching tribute to her father on the ninth anniversary of his passing.

The TV personality and model posted a photo of herself and her dad, Freddie, today to mark the time passed since his death.

"Nine years today since my amazing dad Freddie passed away," she wrote.

"It's not so much a sad day I like to think of all the fun times instead. Always thinking of him."

Vogue also included a photo of herself and her dad when she was a child. 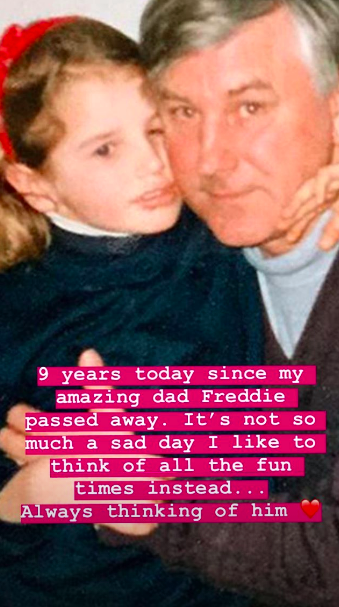 This comes a few days after Vogue praised husband Spencer Matthews for reaching 18 months of sobriety.

She shared another touching post on her Instagram page last week, detailing her husband's achievement - and earnestly announcing the launch of his latest business venture.

"So unbelievably proud of my husband and best friend Spencer Matthews," she wrote. 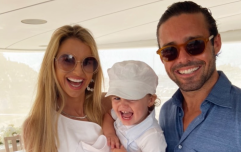 END_OF_DOCUMENT_TOKEN_TO_BE_REPLACED

"He has always been incredible to me but to watch how he’s transformed his life over the last 18 months has made me love and admire him even more.

"Since becoming sober he’s been working on his own project, the @cleanliquor company. I truly believe that the way we drink is changing and @cleanliquor is going to make a massive difference to so many peoples lives including my own."

Spencer made the conscious decision to give up alcohol ahead of becoming a father himself.

He said that used to give up alcohol for periods of time, but that his "reward" always ended up being more drink.

"In the back of my mind for many years, I had always felt that my relationship with alcohol, although seemingly harmless was unhealthy and somewhat destructive," he said.

"Drinking lead me to make poor decisions and achieving my full potential was slipping away."

Vogue and Spencer recently announced their decision to move back to Ireland. The presenter said that she is planning on house hunting in Howth.


popular
Say hello to the €19 Penneys skirt that will go with everything in your wardrobe
Meet the cleanser that reduced pore size for 91 percent of women (in just three weeks!!!)
RUN! The €16 floral Penneys dress that fits like a dream is in stores now
Met Éireann state that three days of snow, hail, and sleet is coming for parts of Ireland
The one food that the Royal Family are forbidden from eating
Say hello to the €45 ASOS dress you're going to want in your wardrobe for spring
Brad Pitt's response to the drama over his reunion with Jennifer Aniston is interesting, to say the least
You may also like
2 weeks ago
Vogue Williams calls flat tummy shakes a 'ridiculous product' following Khloe Kardashian controversy
3 weeks ago
Vogue Williams praises her brave son Theodore after an 'accident' in St. Barts
4 weeks ago
Vogue Williams reveals Christmas was 'very different' this year as she celebrates away from home
1 month ago
Vogue Williams details receiving 'nasty' messages about her body at the beach
1 month ago
Vogue Williams just wore the most STUNNING €42 sequin skirt from Marks and Spencer
2 months ago
We are absolutely WEAK for the skirt from Marks and Spencer that Vogue Williams just wore
Next Page