Adele is the best. She has the lowest tolerance for bullshit in the world, and we love her for it.

Yet another example of this is her reaction to being asked her opinion on breastfeeding while she was greeting members of her audience at London's 02 Arena.

Breastfeeding has been in the news lately, with chef Jamie Oliver coming under fire for saying it was easy to breastfeed, which angered many women who struggle to do so. 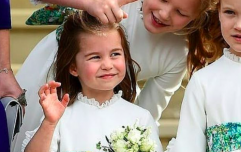 END_OF_DOCUMENT_TOKEN_TO_BE_REPLACED

According to The Independent, Adele, who has a three-year-old replied:

“It’s f**king ridiculous, and all those people who put pressure on us, you can go f**k yourselves, alright? Because it's hard. Some of us can't do it! I managed about nine weeks with my boobs (I mean I trip over them – I’ve got a very good push-up bra). 'Some of my mates got post-natal depression from the way those midwives were talking. Idiots.'

“Breastfeed if you can but don’t worry, [formula milk] Aptamil’s just as good. I mean, I loved it, all I wanted to do was breastfeed and then I couldn’t and then I felt like, ‘if I was in the jungle now back in the day, my kid would be dead because my milk’s gone.’”

WHAT A SOUND WOMAN.

Girls With Goals || Her · Ep.161: Feeling Peachy - Sharon Keegan of Peachylean on being an absolute BOSS!
popular
Khloe Kardashian has JUST confirmed she is pregnant
The DIY frozen coffee recipe that's so delicious you'll never pay for an iced latte again
Here's what happens on every day of your menstrual cycle (roughly)
How to INSTANTLY unblock your stuffy nose (we swear this works)
10 signs that your Gilmore Girls binge has gone way too far
Someone has ranked the penis size of men from all over the world
The First Quadrillionaire? Paypal Accidentally Gives Man $92 Quadrillion
You may also like
1 year ago
Here's how you can avail of the new National Childcare Scheme
2 years ago
13 tiny (but important) lessons kids can teach us about being happier
2 years ago
Dee Devlin shares photo for the first time since giving birth to her second child
3 years ago
This could be the reason why kids don't like you
3 years ago
10 things you definitely said to your younger siblings when you were small
3 years ago
12 tweets that perfectly sum up last night's Late Late Toy Show
Next Page