Baby news is where it's at in celeb land these days.

Beyoncé kicked it all of with THAT photo shoot, people are convinced Cheryl will go into labour any minute now, Rosie Huntington-Whiteley just shared her baby news and it's now been confirmed that Amal and George Clooney are having twins. 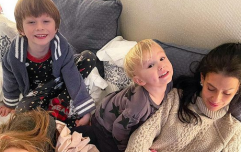 Hilaria and Alec Baldwin welcome baby No.6 - five months after baby No.5

END_OF_DOCUMENT_TOKEN_TO_BE_REPLACED

In recent months, speculation had been mounting that Amal was pregnant but the couple declined to comment.

However, according to E! News, the news has just been confirmed during an episode of American daytime TV show The Talk.

Julie Chen, a co-host on the show said:

"Congratulations are in order for George and Amal Clooney! The Talk has confirmed that the 55-year-old superstar and his highly accomplished 39-year-old attorney wife are expecting twins".

Apparently, Amal is expecting in June and one thing is for sure, there's a baby boom in Hollywood right now.