Anne Hathaway has 'revealed the sex' of her second child

Anne Hathaway has reportedly revealed the sex of her second child.

Earlier this week, the actress made her first public appearance since giving birth as she walked the red carpet at the Critics' Choice Awards.

And Us Weekly report that she confirmed she and her husband Adam Schulman have welcomed a baby boy, after the 37-year-old was showing off photos of the newborn on her phone.

They report that she was heard saying 'this is him' while pointing to the screen, with the onlooker replying: 'oh, he's so cute!' 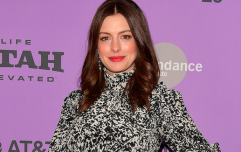 The couple are already parents to their three-year-old son, Jonathan. Hathaway is thought to have given birth some time in late 2019. 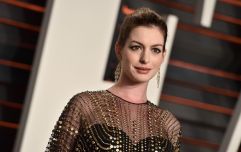 END_OF_DOCUMENT_TOKEN_TO_BE_REPLACED

The couple were spotted in early December, with Hathaway holding a newborn and walking alongside Shulman and Jonathan.

She announced they were expecting their second child in July 2019, when she posted a photo of her baby bump.

"It's not for a movie...#2," she jokingly captioned the photo, before adding. "⁣All kidding aside, for everyone going through infertility and conception hell, please know it was not a straight line to either of my pregnancies. Sending you extra love."

popular
Wagatha Christie: Rebekah Vardy storms out of court just 30 minutes into final day
Everything we know so far about Kourtney and Travis's Italian wedding
Claire Byrne Live viewers in shock as woman shares family DNA secret
Only a matter of time before monkeypox spreads to Ireland, says expert
Helen McCrory's children give heartbreaking tributes at her memorial service
Rebel Wilson claims male co-star sexually harrassed her
Sainsbury's evacuated after several people fall ill with breathing problems
You may also like
1 year ago
Anne Hathaway apologises to children with limb differences after The Witches remake
2 years ago
Anne Hathaway has revealed that her fall in The Princess Diaries was an accident
2 years ago
Police called to Anne Hathaway's The Witches set after crew member is stabbed
3 years ago
Anne Hathaway confirms work on Princess Diaries 3 is underway and we are SO excited
3 years ago
Emily Blunt says this is who The Devil Wears Prada's Miranda Priestly is REALLY based on
3 years ago
Anne Hathaway just debuted a new hair colour and it's pretty dramatic
Next Page