Bill Cosby Posts On Social Media After His Arrest

Bill Cosby has been embroiled in controversy regarding his treatment of women for many months now, with many individuals coming forwards to accuse him of sexual assault and rape on a timeline over several decades.

He was charged in Pennsylvania in relation to a case where he was accused of assault by Andrea Constand.

He took to Twitter a day later to thank his fans for the support:

Friends and fans, Thank You. 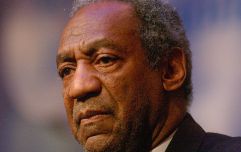 END_OF_DOCUMENT_TOKEN_TO_BE_REPLACED

It has also emerged that Cosby's wife, Camille will have to testify against him in a deposition in a separate lawsuit involving seven women accusing Cosby of sexual misconduct according to ABCNews.

"The judge ruled that her feelings did not outweigh the potential significance of her testimony and that because of Camille Cosby's dual role as Bill's wife and business manager, it was possible that she may have information relevant to the civil case."

popular
Davide Sanclimenti opens up on having kids with Ekin-Su Cülcüloğlu as he turns down Dancing On Ice
People are being warned not to dress as Jeffrey Dahmer for Halloween
Anna Delvey is set to be released from prison
Why Are Men so Obsessed With Boobs? The Answer is Pretty Surprising...
Primark reintroduces female-only fitting rooms after two men walk in on woman
So, William and Harry have a step sister... and who knew?
Someone has ranked the penis size of men from all over the world
You may also like
4 years ago
BREAKING: Actor Bill Cosby has been sentenced to 10 years in jail for sexual assault
4 years ago
BREAKING: Bill Cosby has been found guilty of sexual assault
5 years ago
Is Bill Cosby suggesting he's a victim of racism?
6 years ago
Despite His Best Efforts, Bill Cosby Will Face Sexual Assault Trial
6 years ago
Bill Cosby Charged With Sexual Assault
7 years ago
Alleged Victims Of Bill Cosby Pose For Powerful Cover of 'New York Magazine'
Next Page