Blake Lively really can do it all.

The 30-year-old's most recent project, All I See Is You, showed off some of her impressive talents, from her acting chops to her seriously stylish ability to switch things up during the press tour.

But it looks like Blake is now ready to add singer to her CV.

The mum-of-two features on two songs from the film's original soundtrack, after it got quietly released at the end of October.

The first of the tunes is called In Our Dreams, a melancholy-but-simple love song that showcases the actress' vocals.

All I See Is You stars Blake Lively as a blind woman dependent on her husband, who partially gains her eyesight back after a "miracle" surgery - which ends up leading to her discovering some truths  about their relationship. 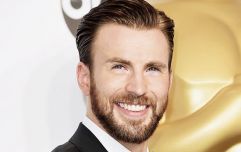 Did you know Chris Evans has a brother who looks just like him? Because we didn't

END_OF_DOCUMENT_TOKEN_TO_BE_REPLACED

It looks set to be an experience of the sense, which focuses on power

But the film's director Marc Forster told Vanity Fair he wasn't sure if the Blake could sing or not when he first cast her.

And he admitted that at one point, he had considered dubbing her vocals with someone else's voice.

He recalled to the publication about the recording session:

"Suddenly we were in a studio in L.A. and she is in front of a mic and she starts singing.

"The studio was Babyface’s, and he came in and was suddenly standing there saying, ‘She’s great! She needs no help.’”

popular
5 new additions to Netflix to spend your weekend watching
Gwen Stefani reportedly pregnant with baby number four
Someone has ranked the penis size of men from all over the world
Here's what happens on every day of your menstrual cycle (roughly)
Amy Schumer reveals that her husband Chris Fischer has autism spectrum disorder
Why Are Men so Obsessed With Boobs? The Answer is Pretty Surprising...
Kate Middleton has addressed the rumours that she's pregnant with her fourth child
You may also like
1 week ago
The Half Of It is the Netflix teen romance we never knew we needed
2 weeks ago
All the movies worth watching on TV this weekend
4 weeks ago
5 new additions to Netflix to spend your Saturday night watching
1 month ago
QUIZ: Can you guess the Disney movie from its opening line?
1 month ago
QUIZ: How well do you know these animal movies?
1 month ago
Omniplex reveal new safety measures for reopening of cinemas from next week
Next Page