'The Body Coach' Joe Wicks and his wife Rosie have welcomed their second child.

The couple, who wed earlier this year, had their first child - baby India - almost a year and a half ago.

And back in August, they announced they were expecting a second child - and that they were "very happy and excited" but the soon-to-be addition to their family.

Taking to Instagram earlier this week, Wicks revealed Rosie had given birth three weeks early - and that they were now parents to a baby boy.

"We welcomed our little baby boy into the world today. He is the best early Christmas present ever," he wrote.

"He decided to come 3 weeks earlier than expected and weighs 5lb 14oz. Rosie and the baby are both happy and doing great. We still haven’t got a name for him yet but I’ll share it when we do."

He also shared a series of snaps of the moment that their daughter, Indie, met her newborn baby brother. 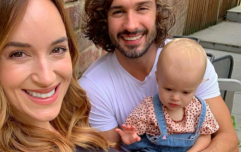 END_OF_DOCUMENT_TOKEN_TO_BE_REPLACED

The fitness guru told his Instagram followers back in August that he and Rosie were expecting their second child.

"Weeeeeee’re having another baby," wrote Wicks.

"We are very happy and excited to grow our family. We don’t know the sex and won’t find out but Rosie is now 19 weeks pregnant so Indie will be getting a little brother or sister in January."

popular
A celebrity hairstylist just shared a genius hack for the perfect messy bun
What we can expect from Emily in Paris seasons 3 and 4
Here are all the Instagram accounts of the stars of Netflix's Cheer
Penneys has a new homeware collection – and it looks so high-end
YouTube star Adalia Rose dies, aged 15
Here's what happens on every day of your menstrual cycle (roughly)
5k walk in aid of Women's Aid to take place in honour of Ashling Murphy
You may also like
1 year ago
The Body Coach Joe Wicks' PE classes are back for lockdown
1 year ago
#SocialDistancing: Almost three million people watched Joe Wicks' first online PE class
2 years ago
The Body Coach Joe Wicks and Rosie Jones have gotten married
2 years ago
Joe Wicks calls the Late Late Show audience a 'tough crowd' after last night's appearance
3 years ago
Joe Wicks reveals the reason he changed his mind about marrying his girlfriend
3 years ago
'The Body Coach' Joe Wicks and girlfriend Rosie have welcomed their first child
Next Page