The lovely Caroline Flack has received a lot of backlash over the years for her relationships.

Sure, she has a thing for younger men, but that really isn't anyone's business, is it? 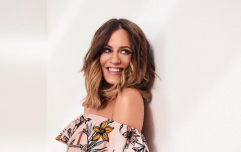 END_OF_DOCUMENT_TOKEN_TO_BE_REPLACED

Most famously, Caroline got quite a bit of flack (pun intended) for dating Harry Styles a number of years ago.

Anyway, the presenter is sick of the bullshit, and has words for those people who have an issue with her taste in men.

She posted an image of her upcoming cover of You magazine on Instagram, and wrote about how she wanted to address "some of the 'flack'" she has received over the year.

I normally keep my mouth shut when it comes to my life and being in the public eye ... but for the first time I really wanted to write something personal about some of the ‘flack’ I’ve had over the years and how I quite frankly don’t care... thank you @jo_elvin for letting me let loose ❤️ OUT SUNDAY

She also added that she "quite frankly doesn't care". Dead right.

"I normally keep my mouth shut when it comes to my life and being in the public eye... but for the first time I really wanted to write something personal about some of the ‘flack’ I’ve had over the years and how I quite frankly don’t care."

Amazingly, a quote from the interview also reads: "If 'cougar' is supposed to be an insult, I'm making it a badge of honour."

This all comes a week after Caroline Flack was romantically linked to her trainer, Bradley Simmonds , 24.

However, friends of the pair have insisted that they are just good mates, and have never dated.

Another BRILLIANT Brits. Thank you @warnermusic for taking such good care of us. What a gorgeous evening . Thank you @nathan.charles.smith for once again being The best date ?. @benclockonego @styledbynana

At the time of her relationship with Harry Styles, Caroline said:

“I keep thinking, what have I done wrong? But I haven’t done anything wrong. What’s hard for me to get my head around is people saying it’s ­disgusting. I don’t think it is." 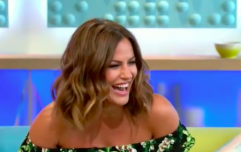 END_OF_DOCUMENT_TOKEN_TO_BE_REPLACED

"I feel like I shouldn’t have to worry about what I do. But it’s a social thing that people aren’t accepting of big age gaps. I know it’s human nature to gossip. But why say it’s bad? No one’s being hurt."

She can date whoever she likes, at the end of the day.

popular
Khloe Kardashian has JUST confirmed she is pregnant
The DIY frozen coffee recipe that's so delicious you'll never pay for an iced latte again
Someone has ranked the penis size of men from all over the world
How to INSTANTLY unblock your stuffy nose (we swear this works)
Palace source says THIS incident on the tour of Australia upset Meghan's staff
Wayne and Coleen Rooney spotted holidaying in Ireland
Blac Chyna drops all Kardashian sisters except one from her lawsuit
You may also like
3 months ago
Caroline Flack's family release previously unseen photos ahead of new documentary
4 months ago
WATCH: The trailer for Channel 4's Caroline Flack documentary is here
4 months ago
Caroline Flack's ex Lewis Burton shares tribute on anniversary of her death
1 year ago
'It'll never be right': Laura Whitmore says Caroline Flack's death 'scared' her
1 year ago
Love Island's Laura Anderson has shared her tattoo tribute to Caroline Flack
1 year ago
Love Island pay special tribute to Caroline Flack with 'through the years' montage video
Next Page