Charlotte Crosby has said that she's become the victim of cyberbullying after a rant about Love Island's Dr Alex George.

Charlotte this week tweeted that she found Alex "vile" and said that she had "no words for you horrendous sun burnt skin." 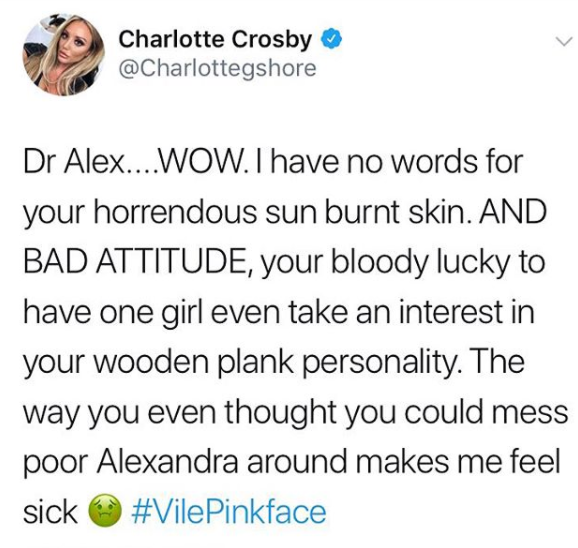 He was "lucky to have one girl even take an interest in your wooden plank personality," she continued.

In response, Dr Alex's friends tweeted that they expected better from someone with such a large online following and urged anyone who was bullied not to stand for it.

1/2
Expressing an opinion for disliking someone’s personality or mannerisms is understandable, but to attack people for their physical appearance could be considered bullying.

Some people are genetically more susceptible to sunlight, some people have slower metabolisms etc etc https://t.co/Wz4XuXyWqK

2/2
With the number of suicides and mental health problems related to cyber bullying we would have expected better from someone with such an influencial online following. ?
If anyone is bullied because of their physical appearance, don’t stand for it or speak to others for help https://t.co/Wz4XuXyWqK

In another tweet, they said that Alex was on medication for his skin and that his sunburn couldn't be helped.

As a final nod to our comments earlier.
Alex takes medication for his skin, which he was conscious of for a long time hence our reluctance to mention anything. One side effect is photosensitivity to sunlight which he and many thousands who also use the medication cannot help.
X 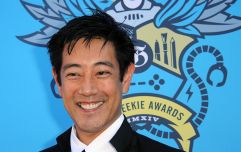 END_OF_DOCUMENT_TOKEN_TO_BE_REPLACED

The tweets have garnered a huge response online, with a number of fans bringing up the fact that Charlotte has spoken out about cyberbullying in the past.

Taking to Twitter she apologised and explained that seeing a girl upset over a boy had upset her.

I don’t sometimes go in too hard especially when I see a girl getting treated shitty by a boy on a reality TV show, that’s something obviously close to my heart. I’m sorry if I offended anyone with my animated observation of Alex’s sunburn - it was not my intention....

Later she posted a tearful video to Instagram, saying that she was now being bullied by Dr Alex fans. 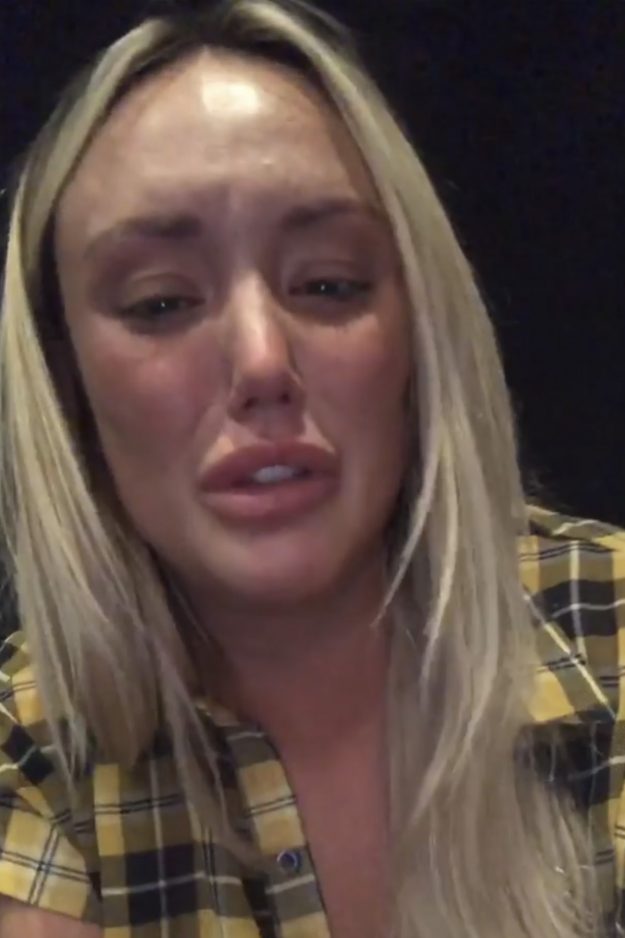 "Your anti-bullying post has created a load of bullying," she said.

"It’s pushed people to send me an influx… I’m not talking a couple of hundred, it’s like thousands, which is now completely going against what they’ve stood for in this tweet.”

She has also retweeted a number of fans who defended her online.

popular
Ed Sheeran is reportedly expecting a baby with wife Cherry Seaborn
Irish influencer Lisa Jordan reveals her little boy's name and it's so cute
Power ponytails and perfect messy buns! Here's some TikTok hair hacks to try at home
This 'Mississippi Mud Pie' recipe is a must-try for chocolate cake fans
Our Girl is axed after talks for Jacqueline Jossa to replace Michelle Keegan are shelved
Here's what happens on every day of your menstrual cycle (roughly)
Jennifer Aniston has made a statement about her relationship with Brad Pitt
You may also like
4 days ago
Netflix have shared the first look at Lily James and Armie Hammer in Rebecca
4 days ago
The second season of Dirty John lands on Netflix next week and we’re already hooked
1 week ago
QUIZ: How well do you know The Young Offenders?
1 week ago
Ellen DeGeneres addresses workplace allegations in letter to staff
1 week ago
WATCH: Brendan Gleeson nails the Donald Trump look and voice in first trailer for The Comey Rule
1 week ago
Erin's Diary: An official Derry Girls book is coming out this year
Next Page