Everyone thought the same thing about Ryan Reynolds' Instagram picture

He's one of our favourite people on social media.

With his gas pictures of Blake, and his hilarious tweets about his children, it's hard not to love Ryan Reynolds.

However, his latest pic on social media has caused everyone to ask the same thing... was Ryan on Saved By The Bell?!

Now, fans of the show will of course know that no, he was not on the hit tv series, but he looked incredibly like Zack Morris in the 90s. 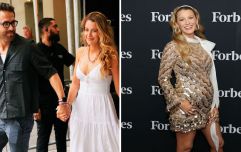 END_OF_DOCUMENT_TOKEN_TO_BE_REPLACED

Some of the comments on the post included: "OMG were you channelling Zack from Saved By The Bell (sic)??? Don’t worry we all still would!!!"

While another said: "Totally 90s. You could have played Zack on Saved By The Bell!"

Other Instagram users also made a lot of Backstreet Boys comments, but all we want to do now is go back and watch some old school Nickelodeon.

popular
Mollie King announces death of her father just weeks after welcoming her first child
Stevie Nicks leads tributes following the death of Christine McVie
Gifts for Him: 18 affordable presents for your old fella, brother or boyfriend this Christmas
Here are the first four people officially heading onto Dancing With The Stars
Gwen Stefani reportedly pregnant with baby number four
Science says this is how many dates you have to go on before you find 'The One'
Why Are Men so Obsessed With Boobs? The Answer is Pretty Surprising...
You may also like
1 month ago
Will Ferrell is starring in a new Christmas movie... and it's with Ryan Reynolds
2 years ago
"Deeply and unreservedly sorry:" Ryan Reynolds apologises for marrying on former slave plantation
2 years ago
Blake Lively and Ryan Reynolds pledge $1m to food banks during Covid-19 outbreak
3 years ago
Blake Lively and Ryan Reynolds have welcomed their third child
3 years ago
Ryan Reynolds and Will Ferrell to star in a Christmas movie together
3 years ago
Ryan Reynolds shares the 'greatest present' Blake Lively ever got him
Next Page