FINALLY! Ariana Grande's music video for Thank U, Next is here

Ariana Grande's music video for Thank U, Next has officially arrived.

The 25-year-old released the breakup song of all breakup songs after she split from her fiancé, Pete Davidson, earlier this year.

And we have basically not stopped playing it since.

END_OF_DOCUMENT_TOKEN_TO_BE_REPLACED

Then, earlier this month, she began teasing the video for the song - and it's become possibly the most highly-anticipated music video in...just about forever, really.

Through a series of Instagram photos, she revealed that the video is going to be paying tribute to some of the most iconic movies from the noughties - including 13 Going on 30, Legally Blonde, Bring it On and, of course, Mean Girls. 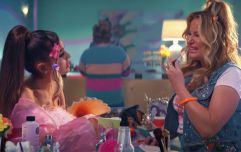 Jennifer Coolidge thanks Ariana Grande for reigniting her career

END_OF_DOCUMENT_TOKEN_TO_BE_REPLACED

And it got even better earlier this week when Ariana shared a behind-the-scenes clip that hinted at a bunch of cameos.

Anyone else feeling incredibly nostalgic?

Anyways, after a mini-countdown on Friday (accompanied by some more behind-the-scenes photos), the Thank U, Next video has finally arrived.

You can check out the music video of Ariana Grande's Thank U, Next below.

popular
Here is the reported I'm A Celeb All Stars line-up
Two Love Island 2022 stars have just become step siblings...
Molly Mae Hague shares emotional moment she discovered she was pregnant
Abducted in Plain Sight: True crime drama follows girl who was kidnapped twice by the same man
Female child rushed to hospital after violent incident in Co. Clare
5 delicious brunch spots around Ireland to try out on your next trip with the girls
Young girl found injured in Co. Clare house is in critical condition
You may also like
5 days ago
Wicked the Movie(s): Everything we know so far
5 months ago
Wicked movie to be split into two different films
10 months ago
Petition to keep James Corden from starring in new Wicked film hits 25,000 signatures
10 months ago
Ariana Grande and Cynthia Erivo cast in Wicked movie
11 months ago
Ariana Grande granted restraining order against stalker who allegedly threatened to kill her
1 year ago
It looks like Ariana Grande's is the next celeb make up line we'll be obsessing over
Next Page