Here's how Meghan's dad Thomas reacted to her pregnancy news

The 74-year-old is apparently "delighted" that Meghan is expecting her first child. He also thinks that she will be a "great mom."

The Sun reports that Thomas had heard the news before it was announced by Kensington Palace.

He was not mentioned in the palace's official statement.

"He heard the news before it was made public and was overjoyed. He thinks Meghan will make a great mum as she is already so maternal." 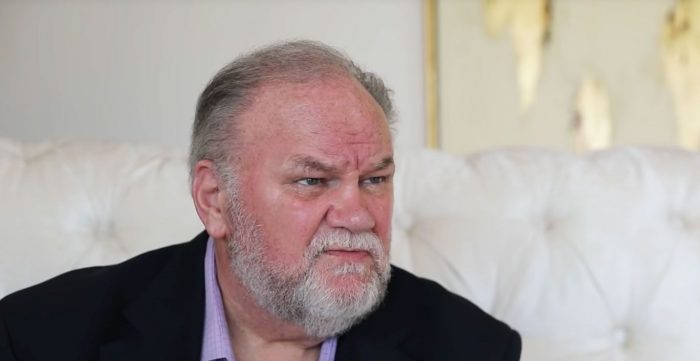 Kensington Palace announced that the couple were expecting yesterday, stating that the baby would be arriving in Spring 2019.

In a statement, they said that the rest of the royal family were happy to hear the good news.

"The Queen, Duke of Edinburgh, Prince of Wales, duchess of Cornwall and Duke and Duchess of Cambridge are delighted for the couple and were able to congratulate them on Friday at the wedding in person.

"Ms Doria Ragland is very happy about the lovely news and she looks forward to welcoming her first grandchild."

The news comes as Meghan and Harry embark on a royal tour of Australia, New Zealand, Fiji and Tonga.

The tour takes place over 16 days.

popular
How to turn 20 days of annual leave into 50 days off
Richard Madeley under fire for comments about Kate Middleton's waist
Man arrested after woman raped on train as passengers filmed it
WATCH: The first trailer for Ozark Season 4 just dropped
70-year-old woman reportedly becomes first-time mum after welcoming baby boy
Police search for missing 4-year-old girl in Australian outback
Police launch investigation after woman "spiked with needle" in UK nightclub
You may also like
1 month ago
Piers Morgan wins Ofcom complaint over Meghan Markle comments
2 months ago
Meghan Markle's brother hits out at her as he enters Big Brother house
2 months ago
Steal her style: How to recreate Meghan Markle's sleek home office on a budget
2 months ago
Prince Harry makes hilarious cameo in Meghan's 40th birthday video
3 months ago
Meghan Markle is producing her own Netflix series
3 months ago
Meghan Markle is ditching her royal title
Next Page