Elton John has called for the boycott of Dolce and Gabbana over remarks made by the fashion duo over the weekend.

Domenico Dolce and Stefano Gabbana stated that children born from IVF were ‘synthetic’ and Elton John has now called for a boycott on their brand.

“How dare you refer to my beautiful children as ‘synthetic’,” he said.

END_OF_DOCUMENT_TOKEN_TO_BE_REPLACED

“And shame on you for wagging your judgemental little fingers at IVF – a miracle that has allowed legions of loving people, both straight and gay, to [fulfil] their dream of having children,” Elton John wrote in an Instagram post on Saturday.

“Your archaic thinking is out of step with the times, just like your fashions,” he continued.

“I shall never wear Dolce and Gabbana ever again. #BoycottDolceGabbana.” 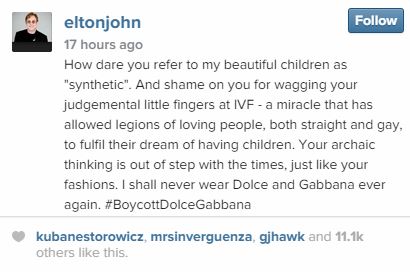 The designers made the comments in an interview with Italy’s Panorama earlier this week.

END_OF_DOCUMENT_TOKEN_TO_BE_REPLACED

“We oppose gay adoptions,” they said, to much controversy. “The only family is the traditional one… No chemical offsprings and rented uterus: Life has a natural flow, there are things that should not be changed,” they added according to the English translation.

“You are born to a mother and a father – or at least that’s how it should be,” Dolce added.

“I call children of chemistry, synthetic children. Uteri [for] rent, semen chosen from a catalog.”

Gabbana has since responded to Elton John’s criticism and indeed that of fans, by filling his Instagram feed with messages of the support that he has received.

Girls With Goals || Her · Ep.153: Scholarship Squad - We chat to Facebook's Claire O'Hara about our Smurfit Scholarship fund.
popular
Where are they now? The men of Sex & The City
Dad designs bikini line for transgender teens
Here's what happens on every day of your menstrual cycle (roughly)
Someone has ranked the penis size of men from all over the world
Award winning Irish film about conversion therapy debuting this weekend
The latest TikTok beauty trend is drawing on under-eye bags to look tired
REVIEW: 'Pilgrim Hill' - A Lonely Life in Rural Ireland
You may also like
1 year ago
Turns out, this colour of wine gives you the WORST hangover
4 years ago
Gwen Stefani Receives Massive Backlash After "Insulting" April Fools' Prank
4 years ago
Katie Price Names And Shames The Twitter Trolls Bullying Her Son Harvey
4 years ago
Kim Kardashian Blasts "Body-Shaming and Slut-Shaming" In Brilliantly Honest Post
4 years ago
WATCH: Emma Watson Launched HeForShe Arts Week On International Women’s Day
2 weeks ago
Kim Kardashian and Kanye West reportedly filing for divorce
Next Page