The Great British Bake Off's Ruby Tandoh has tied the knot with her girlfriend, Leah Pritchard.

The 26-year-old, who was a finalist in the 2013 series of the popular baking show, and the musician said 'I do' in a beautiful ceremony in Sheffield late last month.

They continued their celebrations with family and friends at Abbeydale Picturehouse cinema. 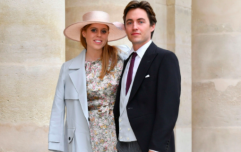 END_OF_DOCUMENT_TOKEN_TO_BE_REPLACED

Social media photos from the big day show Ruby in a floor-length, white gown with embroidery and a pair of pink sandals. Leah wore an electric blue suit and a pair of brown brogues.

The couple went public with their relationship in 2015, after Ruby came out as bisexual on social media.

Leah and Ruby announced their engagement in January 2017.

The Great British Bake Off finalist told Grazia in 2016 that the pair were in it "for the long term".

“Before we met, I spent a lot of time by myself. It’s surprised me how easily I’ve found room for someone else in what I thought was an insular life.

"We’re in it for the long term. I’m not even worried I’m jinxing it by saying that.’"

Since her time on the cooking show, Ruby has written two cookbooks and had a food column with The Guardian, which she left earlier this year.

Girls With Goals || Her · Ep.153: Scholarship Squad - We chat to Facebook's Claire O'Hara about our Smurfit Scholarship fund.
popular
Matthew Perry's dad was a character on Friends and how did we not notice?
Irish people urged to send a hug to loved ones on National Hugging Day in aid of Ronald McDonald House
Robbie Williams "fairly sick" with Covid while holidaying in Caribbean
Gwyneth Paltrow's vagina candle "explodes" in woman’s living room causing fire
Gilmore Girls star says he didn't storm the Capitol, praises those who did
Josepha Madigan compares issues around schools reopening to Mother and Baby Homes
Seven Things You May Not Have Known About... Garth Brooks
You may also like
2 months ago
Bride complains wedding dress looks "nothing like order" before realising she had it on inside out
6 months ago
Luxury Wedding Competitions is giving you the chance to WIN your dream wedding for just €20
6 months ago
"No couple is alone in this:" 3 key pieces of advice for worried brides-to-be during Covid-19
6 months ago
8 out of 10 married couples are owed tax back, are you one of them?
7 months ago
Commitment ceremonies: The solution for couples forced to cancel their weddings due to #Covid-19
7 months ago
Richard Corrigan offering €90,000 wedding package prize for one Irish frontline healthcare worker
Next Page