It was the go-to source of entertainment at sleepovers where we were all welcomed into a seedy world with extremely open arms. It was truly quite a time to be alive.

Earlier today, I took it upon myself to revisit the site to a) see if anyone is still using it and b) fulfil my lifelong dream of being Beyoncé.

Here's how I got on.

Nick was all business and rightfully having none of my bullshit. Either that or I don't think he recognised the picture of Beyoncé. 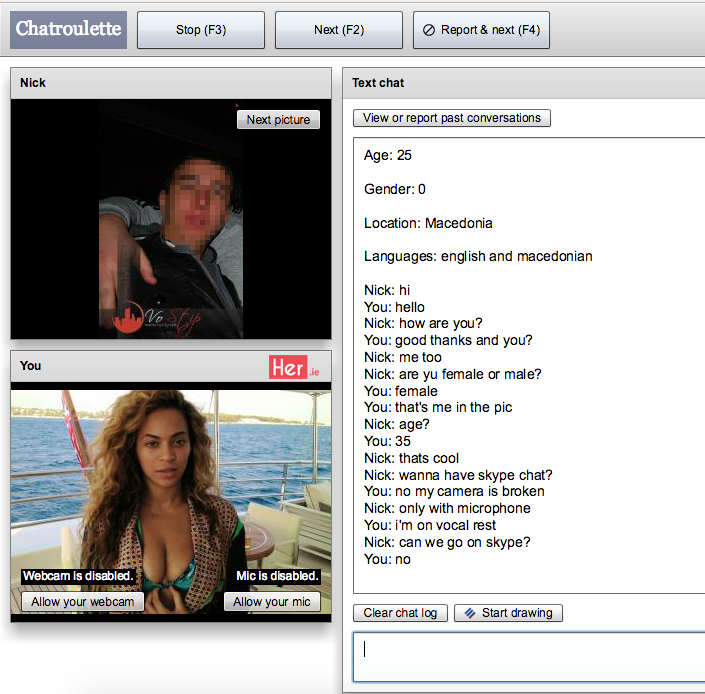 Etienne was similarly all business. Him and Nick should chat, I think they'd get on quite well. 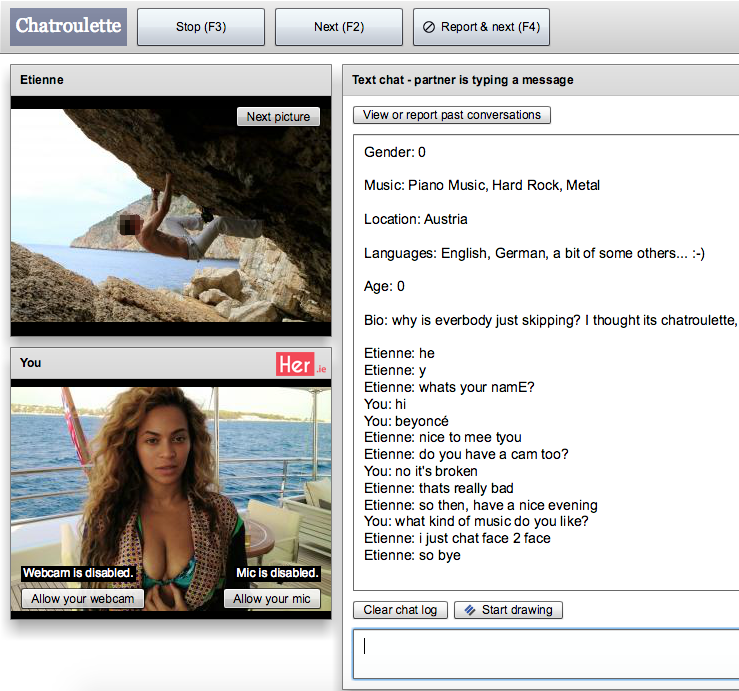 Ansel couldn't believe his luck that he'd been paired with none other than Beyoncé. I tried a quick joke when he replied 'Sorry' to my questioning of his favourite Bey song, but it went straight over his starstruck little head. 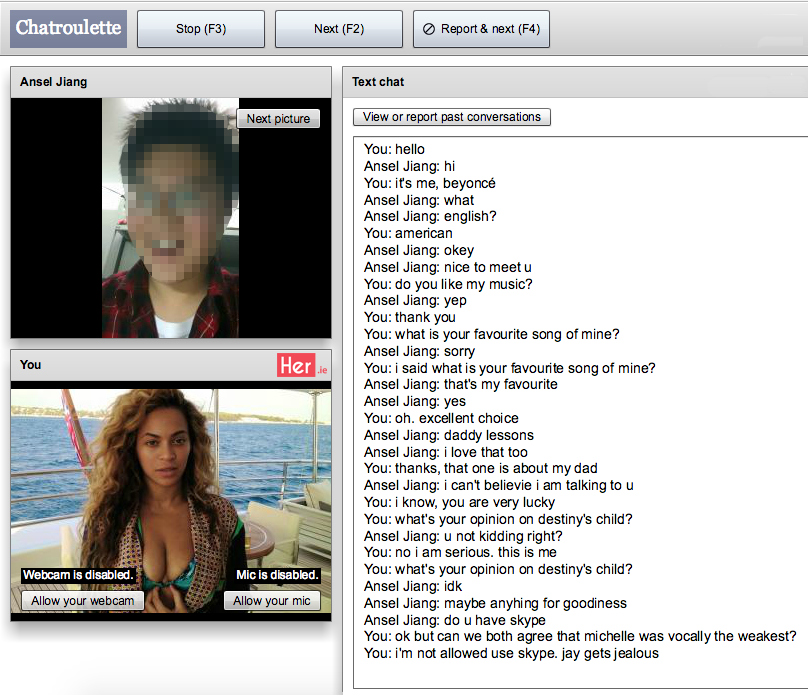 There were no flies on Nicholas, as he very quickly noticed that I (stupidly) had my location turned on, so he inevitably realised that I was in Ireland. Luckily, I had a foolproof cover story. 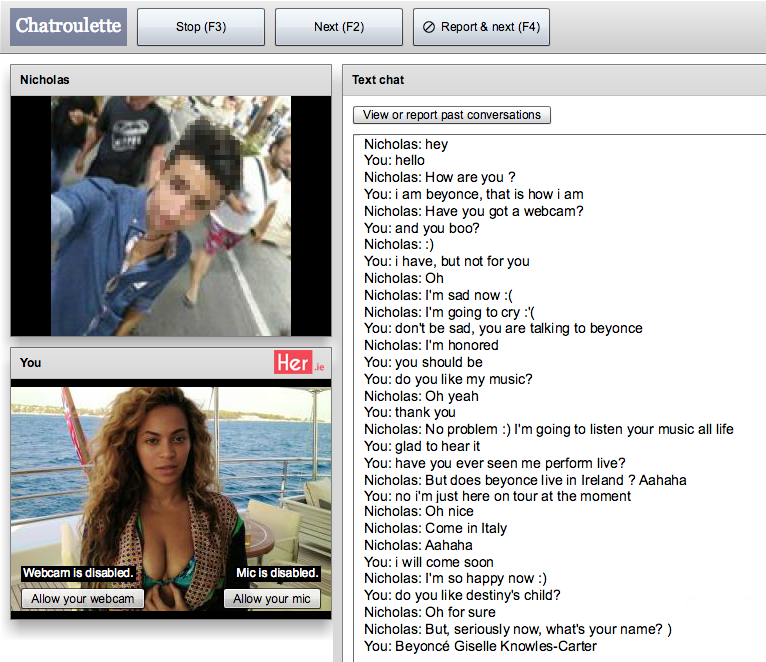 'Partner' and I had a good chat. To be fair, he saw straight through my lies but we had a bit of fun with it. 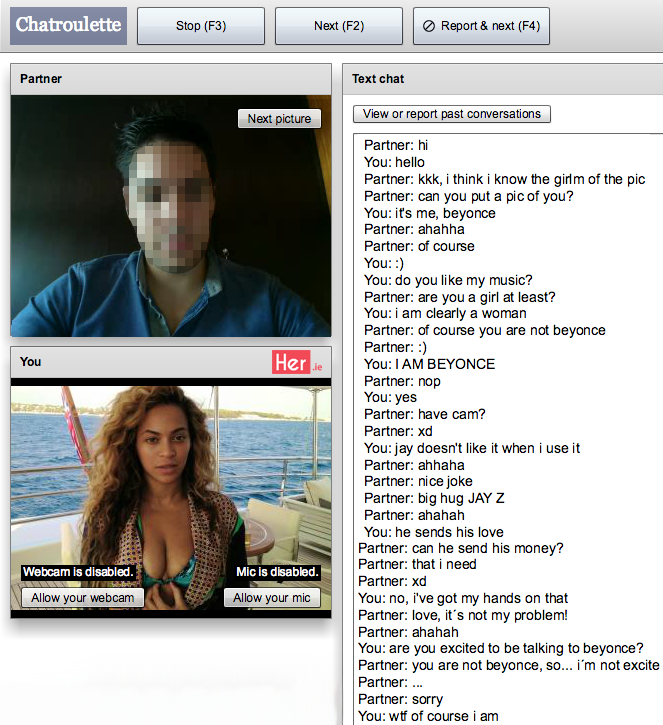 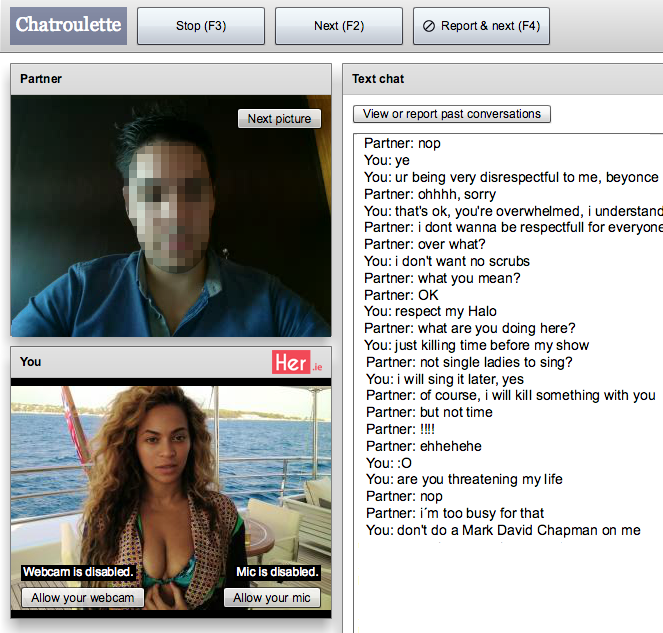 Marko genuinely thought I was Beyoncé, so I was left baffled when he disconnected prematurely. I can only assume he had a dodgy internet connection. 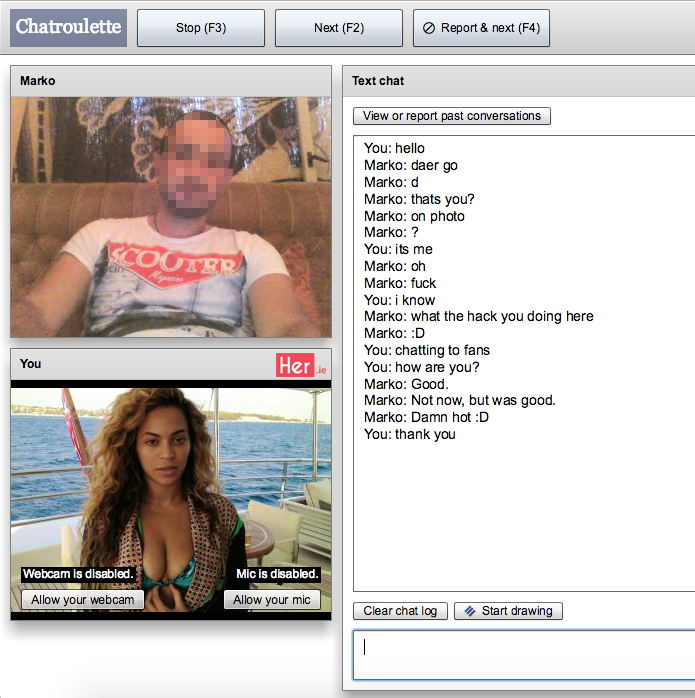 I couldn't believe my luck when I bumped into none other than Conor McGregor on Chatroulette. His username was Alex, but I can only assume that was to keep a low profile. 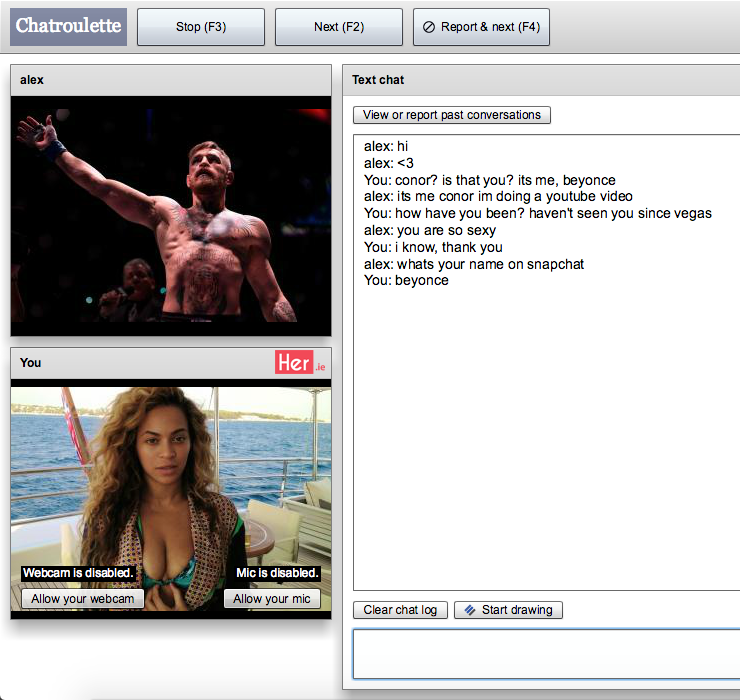 I put all my efforts into this final Chatrouletter. I wanted to get a hint of a smile at the very least. Needless to say, I was left disappointed. 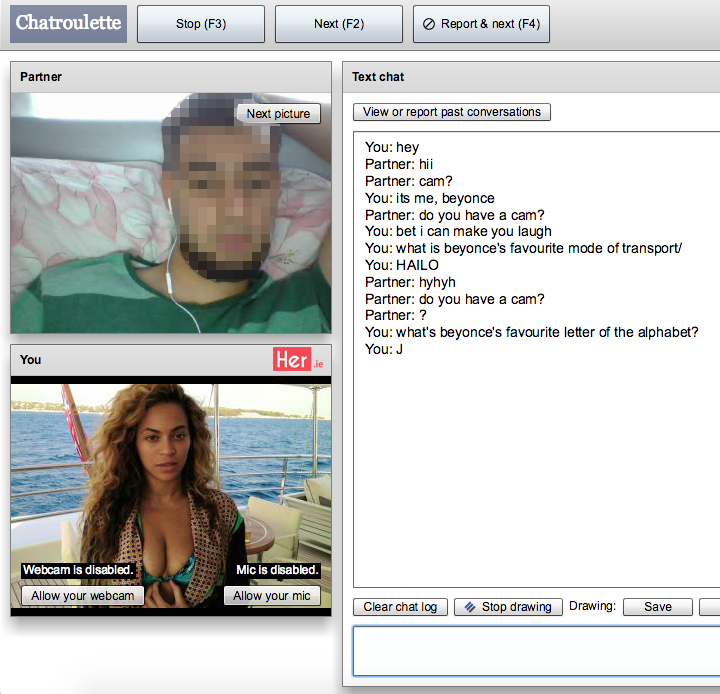 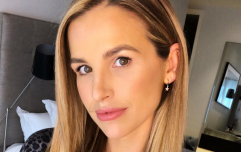 END_OF_DOCUMENT_TOKEN_TO_BE_REPLACED

Overall, pretending to be Beyoncé on Chatroulette was a lot of fun. People typically know it isn't really her with the odd exception. But imagine if it actually was? They'd feel pretty foolish when the realised that it genuinely was me, Beyoncé, all along.

Thanks Her.ie for having me as a guest contributor today x.x Bey x.x


popular
'Be A Lady, They Said!' You need to watch this incredibly powerful video about being a woman
The dress that Holly Willoughby wore this morning is getting very mixed reactions
The comfy €42 M&S boots we're going to be living in all spring
Netflix's Babies documentary is making quite the impression online
Little Fires Everywhere, starring Reese Witherspoon, is set to be your new TV obsession
These €20 Zara trousers are seriously comfortable and they come in three colours
Here's what happens on every day of your menstrual cycle (roughly)
You may also like
2 months ago
80 per cent of people believe social media impacts hiring decisions, study finds
2 months ago
Twitter to remove inactive accounts and free up usernames in December
2 months ago
Stray dog found caring for five abandoned kittens and yes, we're bawling
2 months ago
'What a crazy 24 hours' Aoibhín Garrihy and John Burke welcome their second child
2 months ago
Why you should go on an Instagram unfollow spree right now
3 months ago
There's an unreal new Twitter feature coming, and it sounds very interesting
Next Page