This has us very emotional.

As the saying goes, all good things must come to an end, but we really wish that wasn't the case when it comes to the love story of Chan and Jen.

Speaking in a new interview for the 15th edition of Vegas Magazine, Jenna explained what it was first like to meet Channing when they were working on Step Up.

She said: "We started out as friends, and I would say it was an instant recognition. When we met it felt like we had known each other for many years." 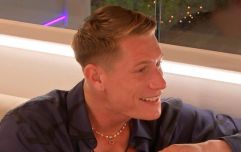 END_OF_DOCUMENT_TOKEN_TO_BE_REPLACED

The pair who announced their split last month took to Instagram breaking the news and highlighting that it was a mutual agreement and they both plan to co-parent their daughter Everly and still very much remain a family.

Jenna and Channing first met when they were on the set of Step Up, capturing our hearts with their on set romance, it too developed off set and the pair went on to wed and were married for nine years.

The star continued to talk about the fact that this is not the end for the pair and that they plan to remain friends saying:

And lastly, the star talked about looking forward with hope and that to always carry the mentality that better days are and will come.

"Being a dancer, you’re ingrained with this mentality to make it work, and you can do it all, but as I matured … and had a child, I’ve realised that you do the things you’re meant to do," she said. "You have to protect that and trust that even though you’re saying no to things, there are a ton of other, better yeses that will be coming."

popular
Bride asks for divorce day after wedding following groom's disrespectful cake stunt
Head of dive squad searching for Nicola Bulley thinks 'something's not right'
These are the most popular names for babies born in February
Here's why Nicola Peltz-Beckham's family are suing her wedding planners
Couple decide to live on cruise ship permanently after finding it's cheaper than paying mortgage
Police believe they know what happened to missing dog walker Nicola Bulley
Man sues friend for £1.9m after she refused to be his girlfriend
You may also like
4 weeks ago
Mum refuses to tell partner gender of their baby after he skipped scan to go to the chippy
11 months ago
There's a candle that lets your husband know you want some of that 'dad bod'...
1 year ago
Men suffer more emotional pain after a break up than women - apparently
1 year ago
Opinion: Charlotte Tilbury's 'relationship advice' is revealing of the beauty industry at large
1 year ago
Ian Bailey has been chatting to the woman who married the ghost of a pirate
1 year ago
Couples who post more selfies are less happy, says study
Next Page