Kendall Jenner has left Victoria's Secret for this underwear brand

Kendall Jenner announced in an Instagram post yesterday that she has become the new brand ambassador for Italian luxury brand, La Perla. 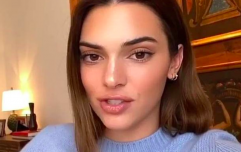 END_OF_DOCUMENT_TOKEN_TO_BE_REPLACED

We were all speculating as to whether or not the KUWTK star would be walking in this years Victoria's Secret Fashion Show which is heading to Shanghai. But now it looks like we have got our answer, as sources tell TMZ that her contract includes a non-compete clause which means walking in this year's show would not of been feasible.

And it looks like Miss Kenny does not come cheap, with the new deal rumoured to have cost the brand over 5 million.

In this new campaign, the 21-year-old model looks all grown-up as she poses in a bath of flowers wearing delicate La Perla underwear. What doesn't that girl look good in?

Kendall had modelled for the brand previously this year, featuring in one of their shoots in May however, announced this week that she is now the face of the company.

Girls With Goals || Her · Ep.151: 'A Story Shared' - Aoife P. Rafter on blogging during a pandemic and living with CF
popular
I'm A Celeb end date confirmed as series wraps up early
Roz Purcell apologises for error with new clothing line amid sizing criticism
The way Diana told William about Charles's affair with Camilla will break you
Here's what happens on every day of your menstrual cycle (roughly)
Irish sustainable clothing company remove all stock from website for Black Friday
Apparently, this is the reason behind Chris Martin and Dakota Johnson's split
Rosanna Davison brings her twin boys home to meet their big sister
You may also like
11 months ago
Kendall Jenner and Cara Delevingne look absolutely unrecognisable in latest modelling shoot
11 months ago
Kendall Jenner and Harry Styles were very flirty while playing Spill Your Guts
11 months ago
Kendall Jenner says she is 'always rooting' for her dad Caitlyn on I'm A Celeb
11 months ago
WATCH: Kendall Jenner got booed at an NFL game and yeah, ouch
1 year ago
Tried and tested: the body cream that will give you an arse like a supermodel
1 year ago
Who wore it better? Kendall Jenner Vs Lily Aldridge
Next Page