Kim Kardashian says that her newborn son is 'Chicago's twin'

Kim Kardashian has said that her newborn son "looks just like" her daughter, Chicago.

The Keeping Up With The Kardashians star announced on Friday that she and her husband, Kanye West, had welcomed their fourth child.

Kim took to Twitter to confirm the arrival of their "perfect" boy, who was born via surrogate.

END_OF_DOCUMENT_TOKEN_TO_BE_REPLACED

And while she hasn't shared a photo (or the name) of the newest member of the Kardashian-West family, the proud mum did tell her fans a little bit about about the little boy.

"I’m sure he will change a lot but now he looks just like her," she added.

END_OF_DOCUMENT_TOKEN_TO_BE_REPLACED

The news that their surrogate had gone into labour was confirmed on Thursday, when Kourtney Kardashian surprised Kris Jenner on the Ellen DeGeneres Show.

She brought her three children - Reign, Penelope, Mason - as well as Chicago, Saint and North onto the show for a Mothers' Day surprise.

Kourtney explained that it had meant to be Kim who would appear on the show - however, their surrogate had gone into labour.

A visibly-shocked Kris asked her: "What! What are we doing here?! For how long?" 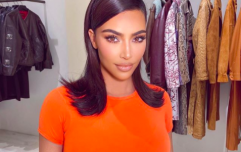 END_OF_DOCUMENT_TOKEN_TO_BE_REPLACED

“And nobody knows, so everyone in the audience don’t tell,” Kourtney laughed.

It was first reported that Kim and Kanye were expecting their fourth child in January this year.

Kim confirmed the news a few weeks later, during an appearance on Watch What Happens Live with Andy Cohen.

“I got drunk at our Christmas Eve party and told some people. I can’t remember who I told because I never get drunk."

The couple are already parents to North, 5, son Saint, 3, and daughter Chicago, 1.

Girls With Goals || Her · Ep.161: Feeling Peachy - Sharon Keegan of Peachylean on being an absolute BOSS!
popular
Big Brother star left temporarily blinded and scarred after TikTok DIY beauty 'hack'
Kate Middleton has addressed the rumours that she's pregnant with her fourth child
How to INSTANTLY unblock your stuffy nose (we swear this works)
Dad of girl attacked at Howth Junction station says she is "fine considering"
More footage of Tristan Thompson cheating on Khloe has emerged
Stephen Bear charged over image based sexual abuse allegations
QUIZ: How well do you really remember the first episode of Friends?
You may also like
2 months ago
It's over: Kim Kardashian files for divorce from Kanye West after seven years of marriage
10 months ago
Kim Kardashian is launching her own true crime podcast with Spotify
1 year ago
Kim Kardashian says production on KUWTK 'shut down for a week' after her fight with Kourtney
1 year ago
Kylie Jenner shows Kim Kardashian her favourite mascara hack and it's actually a game changer
1 year ago
Kim Kardashian's eldest daughter looks 'like a teenager' in latest snap
1 week ago
Amy Adams and Patrick Dempsey land in Ireland for Enchanted sequel
Next Page