"I can be happy with myself that I know the truth."

Love Island's Greg O'Shea has responded to his ex Amber Gill's comments about their split - adding that he "knows the truth" about what happened between them.

Greg and Amber, who won Love Island 2019, split earlier this month - and there's been a lot of back-and-forth about what may (or may not) have gone on between them.

Following Amber's comments about how he broke up with her via text, Greg has now said the beautician "can say whatever she wants" as he "knows the truth" about what happened.

The 24-year-old, who arrived in the villa as the last new contestant for Love Island 2019, was speaking on Ryan Tubridy's Radio One show at the National Ploughing Championships on Tuesday.

"Amber's doing great stuff over the UK. I can be happy with myself that I know the truth and I know what’s happened.

"I’m not going to badmouth [Amber], she’s got great stuff going on, and I can be happy with myself, my friends, and my family knowing what actually happened.

"She can say whatever she wants, but I wish her the absolute best - she's a great woman." 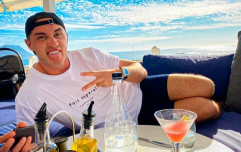 END_OF_DOCUMENT_TOKEN_TO_BE_REPLACED

Previously speaking on the Late Late Show, Greg claimed their split was down to work commitments and the long distance.

However, speaking on Loose Women the following Monday, Amber said she was "disappointed" about how their relationship came to an end.

"From my point of view I still wanted to make it work. There was a call a few days prior, just chatting, not specifically to do with that.

"All I wanted was a bit of effort from him to come to London or Newcastle to see me. I said I'm going to have to give up if you don't put the effort in.

"And he said, 'OK bye'. I was expecting it to be a bit different.

"Obviously I'm really disappointed. I wasn't expecting it at all. I was due to fly to Dublin and spend the weekend with him and go on a TV show together.

"On that day I had to cancel as it wasn't working out. I think the careers and the distance was always a factor.

"I don't know what changed. I wanted to make it work but it is what it is. I am disappointed it's over. I'm booked and busy and I'll be fine. Onwards and upwards from here."

popular
Here's what happens on every day of your menstrual cycle (roughly)
QUIZ: Can you name all 32 counties in Ireland in under 4 minutes?
10 Dublin restaurants with outdoor areas we'll be hitting up for the next 3 weeks
How to INSTANTLY unblock your stuffy nose (we swear this works)
Someone has ranked the penis size of men from all over the world
Tried and tested: 3 sheet masks that seriously impressed me
The Queen has banned Meghan Markle from wearing any of Princess Diana's jewellery
You may also like
8 months ago
Greg O'Shea is giving away his Love Island bits to aid the Australian bush fire efforts
9 months ago
Love Island's Greg O'Shea confirms he's single after new romance rumours
9 months ago
Love Island's Greg O'Shea is apparently dating again (and she's also a law graduate)
10 months ago
'It just erupted' Greg O'Shea on new found fame, life after Love Island, and settling down single
11 months ago
Greg O'Shea just launched his own sustainable clothing line, and it's actually very cool
11 months ago
'Extremely professional' No lads, there's no 'romance' between Greg O'Shea and Doireann Garrihy
Next Page