"In this day and age you shouldn't ask questions like that."

Michelle Keegan has slammed "horrible", intrusive questions about when she is going to become a mum - as "it's no-one else's business".

The former Coronation Street actress told The Sun how she was frustrated by “everybody’s obsession” as to when she is going to become a mum.

Talking about the questions, she said:

"People don't know if we're trying. They don't know the background of what's happening. It's no-one else's business. In this day and age you shouldn't ask questions like that."

The actress, who is currently starring in Sky One's Brassic, added she gets "so frustrated" by the questions - especially as her husband, Mark, never gets asked the same.

"I'm asked purely because I'm a woman. But I'm immune to it now - it's like a reaction and as soon as I hear it I brush it off, as it's no-one else's business." 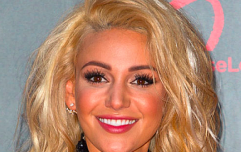 END_OF_DOCUMENT_TOKEN_TO_BE_REPLACED

Michelle and Mark Wright got married in 2015. And while the pair spent a few years living on opposite sides of the world - Michelle in South Africa, to film Our Girl; Mark in Los Angeles, filming E!'s Extra - they are now back living together.

Recalling people's reactions to their long distance relationship, she said:

“Everyone was like, ‘Oh my god, how did you manage?’

“But again, because we’re so used to working separately, it was fine and we’ve got FaceTime — you can be so close to your loved ones without even being there now.”

popular
Irish girls name was the most used Irish name in the United States last year
Met Éireann issues Status Yellow rain warnings for five counties
Love Island fans want Ekin-Su's family to get a reality show following Aftersun appearance
5 simple ways to build a more positive mindset, according to an Irish therapist
Aer Lingus apologises for multiple cancelled flights to and from Dublin Airport
Vicky Phelan "holding her own" as she shares health update
Woman saved from hostage situation after leaving note on food delivery order
You may also like
2 years ago
New series binge! Sky Original's Brassic airs on Sky One tomorrow
3 years ago
People are convinced Michelle Keegan is pregnant thanks to this Instagram post
4 years ago
Everyone is obsessed with Michelle Keegan's polka dot dress and it's nearly sold out
4 years ago
This Corrie favourite is hoping to return to the show despite being killed off
4 years ago
'It's upsetting!': Mark Wright responds to latest cheating rumours
4 years ago
Mark Wright's sweet message for Michelle Keegan as they go long-distance
Next Page