On Wednesday's Ireland AM, the presenter revealed that her long-term boyfriend, who she often refers to as her "roommate", had popped the question over the weekend while the two were enjoying a trip down in Kerry. 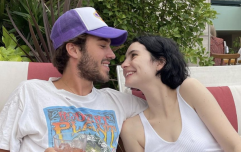 END_OF_DOCUMENT_TOKEN_TO_BE_REPLACED

She explained how, after a few mishaps, he got down on one knee while she was in the kitchen making a cup of tea. And she said yes straight away!

"I got engaged at the weekend. It was very lovely," she told her co-hosts Alan Hughes and Tommy Bowe.

"He was trying to pick a romantic place, we were in the Europe Hotel, and then we were in our favourite hotel in Cromane, but nothing was right!

"Then I kept inviting my mother everywhere with us this weekend. He'd be like, 'Come on let's go for a walk,' and I'd be like: 'Mam come on let's go!'

"So he took his opportunity when we were standing in the kitchen and I was making a cup of tea. He got down on one knee, and yes, I did cry."

There's no date set for the wedding just yet but the Limerick native said she doesn't think it'll be anytime soon.

"It took us years to get here, so the wedding will be in a decade," she laughed.

In a post shared to Instagram after the show, Muireann joked about how her two-costs had finally noticed the ring.

"Just how I wanted it to happen," she wrote. "@tommybowe and @alanhughes announcing my engagement to the world after they finally spotted the ring."

Fans and friends flooded the comment section with their well wishes. 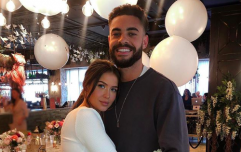 Fashion blogger, Naomi Genes got engaged in Dublin over the weekend

END_OF_DOCUMENT_TOKEN_TO_BE_REPLACED

"I am SO happy for you both," one person wrote.

"Awh Muireann that’s gorgeous news!! Thrilled for you," another added.

Muireann has always preferred to keep her relationship and personal life private, hence why she referred to her boyfriend as her "housemate" in the past.

popular
Charlie Bird says he "cries every day" as he struggles to cope with MND diagnosis
Princess Charlene in "very vulnerable" condition, says father
Real Housewives of Johannesburg star Naledi Willers dies aged 30
Boris Johnson announces birth of "healthy baby girl"
Concerns over travel restrictions this Christmas due to “significant numbers” of Omicron
Marty Morrissey to take a step back from RTÉ after tragic death of mum Peggy
Schoolboy placed in isolation for putting hair in plaits like female classmates
You may also like
5 months ago
Mean Girls Broadway stars announce engagement
5 months ago
It's official - First Dates Ireland couple announce engagement
2 years ago
Research finds the most romantic proposal spot in the world and would you agree?
2 years ago
'Forever my lobster' Gogglebox Ireland's Dawn and Dale announce their engagement
2 years ago
The Internet is HOWLING laughing at this woman modelling her cousin's engagement ring
2 years ago
This genius tip will help save a LOT of money on an engagement ring
Next Page