It looks like Drake was served with a lot more than a fancy meal in a Cincinnati restaurant this week.

END_OF_DOCUMENT_TOKEN_TO_BE_REPLACED

The rapper was pictured getting very cozy with tennis superstar Serena Williams following her win at the Western & Southern Open.

Although the pair had booked a private space at the back of the upscale Italian restaurant, they were snapped locking lips by some curious patrons. 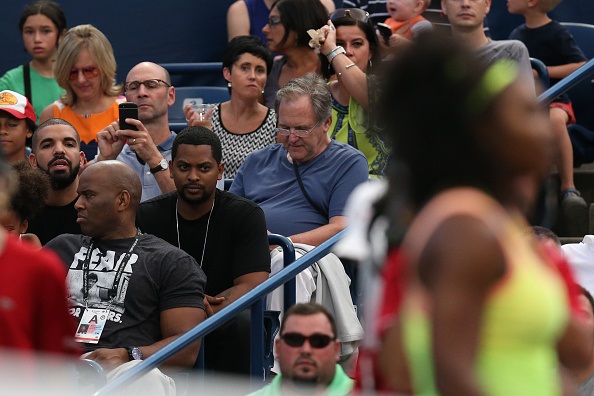 Drake cheering Serena on at Wimbledon earlier this year.

Customers told TMZ that the pair were joined by six other people and at one point ordered a round of tequila shots for the table.

Rumours have been swirling about the pair ever since Drake was spotted cheering the 33-year-old on at Wimbledon.

Now THIS would be a celebrity power couple.

popular
The Daly Dish's Gina introduces newborn baby Gene to the world
Jess Redden and Rob Kearney jet off on their honeymoon after "incredible" wedding
Why Are Men so Obsessed With Boobs? The Answer is Pretty Surprising...
15 signs that prove someone is falling in love with you
Gwen Stefani reportedly pregnant with baby number four
WATCH: The new star-studded trailer for the Harry Potter reunion show is here
Here Are The Top 20 Most Common Pin Codes in The World
You may also like
2 years ago
Turns out, this colour of wine gives you the WORST hangover
5 years ago
Pretty Little Liars actor Brandon Jones could be facing over five years in prison
5 years ago
Gwen Stefani Receives Massive Backlash After "Insulting" April Fools' Prank
5 years ago
Katie Price Names And Shames The Twitter Trolls Bullying Her Son Harvey
5 years ago
Kim Kardashian Blasts "Body-Shaming and Slut-Shaming" In Brilliantly Honest Post
5 years ago
WATCH: Emma Watson Launched HeForShe Arts Week On International Women’s Day
Next Page