Princess Diana had the sweetest nickname for Prince Harry, and we're in floods

In the Channel 5 programme William & Harry: Princes At War? Royal correspondent, Robert Jobson, shed some light on what Diana's relationship with Prince Harry was like.

It also gave an insight in to the late Princess's ideas about the line of succession.

END_OF_DOCUMENT_TOKEN_TO_BE_REPLACED

Mr Jobson said that Diana thought Harry would make a better king than Prince William, and she even had a special nickname for him as a result of it.

"She used to refer to Harry as GKH (Good King Harry) because she thought he’d probably be better equipped for the role in the future than William."

What a cute little nickname? 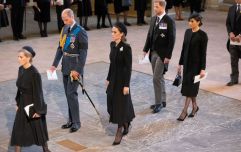 END_OF_DOCUMENT_TOKEN_TO_BE_REPLACED

Before her death, she was asked if the title of king should go directly to William during a Panorama interview, Diana said:

"Well, then you have to see that William’s very young at the moment, so do you want a burden like that to be put on his shoulders at such an age? So I can’t answer that question."

In the same interview, Diana was asked if she believed Charles would ever be king.

END_OF_DOCUMENT_TOKEN_TO_BE_REPLACED

"There was always conflict on that subject with him when we discussed it, and I understood that conflict, because it’s a very demanding role, being Prince of Wales, but it’s an equally more demanding role being king."

"And being Prince of Wales produces more freedom now, and being king would be a little bit more suffocating."

"And because I know the character I would think that the top job, as I call it, would bring enormous limitations to him, and I don’t know whether he could adapt to that."

popular
Primark reintroduces female-only fitting rooms after two men walk in on woman
Davide Sanclimenti opens up on having kids with Ekin-Su Cülcüloğlu as he turns down Dancing On Ice
8-year-old Ukrainian girl stabbed in Clare 'out of danger'
Anna Delvey is set to be released from prison
Man and woman charged with murder of four year old boy in 2021
Woman tells Kate Middleton 'Ireland belongs to the Irish' during Belfast visit
Why Are Men so Obsessed With Boobs? The Answer is Pretty Surprising...
You may also like
3 days ago
The Crown launch casting appeal for Prince Harry
3 weeks ago
Princess Anne shares statement on the death of her mother
3 weeks ago
Prince Harry is making it clear he doesn't want any royal drama
4 weeks ago
Harry and Meghan's children are now a Prince and Princess
1 month ago
Why Meghan Markle doesn't share photos of her children
1 month ago
5 things we learnt from Meghan Markle's most recent interview
Next Page