Royal fans are convinced there is tension between Meghan Markle and Prince William.

If you follow the comings and goings of the royal family, you'll probably know that they were pictured together on Christmas Day in Norfolk.

Kate Middleton, the Duchess of Cambridge, and Meghan Markle, the Duchess of Sussex, appeared to be getting on very well despite persistent rumours of an ongoing feud between the two women. 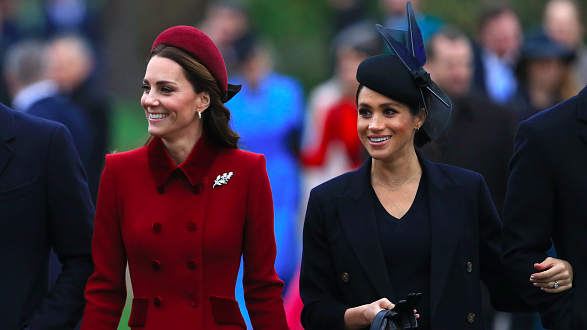 However, now royal fans are convinced that Prince William and Meghan aren't the best of pals at the moment.

A quick clip shows the four greeting well-wishers outside the church where they chatted with people and received flowers from fans.

At one point, Prince William is spotted fixing his scarf, concentrating deeply on the task in hand while the mum-to-be turns back to look at him and looks as though she is about to say something.

He doesn't appear to hear her and that's about all there is to it but one royal fan said Meghan's face is a bit like "wtf".

Check it out for yourself below and the resulting replies from other social media users.

The hell William is doing ??? pic.twitter.com/PRN7L2w0ws

Others agreed with this opinion, saying it looked as though William ignored Meghan and his brother too.

I didn't want to believe those rumors but it does seem like William ignored Meghan and Harry. The Kate and Meghan interactions seemed so fake. I think Kate and William are jealous of Meghan's popularity. #MeghanMarkle https://t.co/p8Klnms8gU

Honestly, if the press wanted their "next" story. They would unpacked William's attitude. He pretty much ignored Harry, Meghan, AND Kate yesterday. Meghan did the heavy lifting in being her usual self and polite to everyone.

We're sure they all get along just fine but at the same time, you have to credit their devoted fans because they literally NEVER miss a trick as you can see from their most recent observations.

It's an exciting time for the family too with the Duke and Duchess of Sussex expecting their first child in spring of next year.

Interestingly, after Meghan's most recent remark about her pregnancy, people think she could be due to give birth sooner than previously thought, you can read more about that here.

popular
Is Kourtney Kardashian dating this guy who looks just like Younes Bendjima?
'Beard-baiting' is now apparently a dating trend - and we're all for it
Someone has ranked the penis size of men from all over the world
Kate Middleton has addressed the rumours that she's pregnant with her fourth child
First look: Princess Diana and Margaret Thatcher in The Crown season four
Here's what happens on every day of your menstrual cycle (roughly)
Dirty Dancing officially arrives on Netflix today and that's our Sunday sorted
You may also like
3 weeks ago
Prince Harry and Meghan Markle sign multiyear deal with Netflix
1 month ago
We now know what Meghan Markle wore on her first date with Prince Harry
3 months ago
Meghan Markle gave a powerful graduation speech to her old high school's students about the current US protests
4 months ago
The 'romantic' gifts Meghan Markle and Prince Harry exchanged for their second wedding anniversary
4 months ago
If this video of Meghan reading to baby Archie doesn't cheer you up, you're clearly dead inside
5 months ago
Prince Harry and Meghan Markle volunteer to deliver meals to vulnerable in LA
Next Page