Just when we thought we couldn't love him anymore.

He's one of the best looking, funniest men on the planet, so why would anyone ever cheat on Ryan Reynolds?

Well, no one did, but the internet is going crazy over a Blake Lively lookalike, who bears an uncanny resemblance to Ryan's wife..and she's engaged to someone else!

The woman in question is Amethyst Realm, who appeared on ITV's This Morning and claimed that she is engaged to marry a ghost. 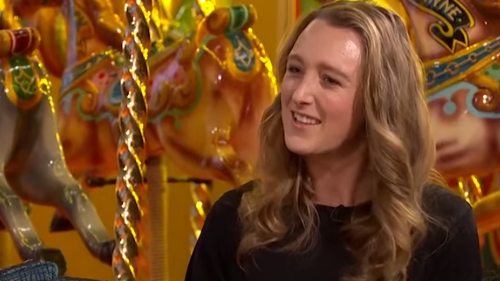 She says she has a deep connection with a ghost of Australian descent, who proposed to her last weekend. Amethyst told Phillip and Rochelle Humes, who is filling in for Holly Willoughby while she is presenting I'm a Celebrity, that her ghost fiancé is being "really picky" when it comes to selecting an engagement ring. When Phillip asked how will he hand the ring over to her, Amethyst replied, "we've got to work all that out."

Some people remarked that the woman looked a little like Hollywood actress, Blake Lively, and husband Ryan Reynolds was quick to spot an opportunity for a bit of humour.

THIS is how I find out?

Ryan's response sparked general hilarity on Twitter, with fans joking that he was "ghosted", while some people expressed mock sympathy:

I don’t know man, but I think stay away from this one. Fast.

Others were sceptical about how little Amethyst actually resembles Blake Lively and "Walmart Blake" became a thing:

This bish looks like walmart Blake, who went through a "2007 Britney Spears" phase. Blake Lively on the other hand, looks like a legit Goddess, and might even be the finest woman alive. So no lol chill the fuck out

It's not the first time Ryan has jokingly mocked his wife. Ryan and Blake have a long history of humorous sparring:

Happy Birthday to my amazing wife.

I think we can all agree, they are relationship goals.

popular
Staycation: 7 gorgeous glamping spots for your Irish summer getaway
QUIZ: Can you name the Keanu Reeves movie from just the screenshot?
QUIZ: How well do you remember The Rugrats Movie?
"I never thought it would be cancer": Stage 4 melanoma patient recalls receiving her diagnosis
Here's what happens on every day of your menstrual cycle (roughly)
How to give your skin the post-lockdown glow it deserves (and needs!), according to an expert
Scott Disick slammed over this 'racist' photo of his daughter, Penelope
You may also like
2 months ago
Wondering how the Gavin & Stacey crew might cope in a lockdown? Twitter has you sorted
4 months ago
Jameela Jamil has come out as queer on Twitter, and serious respect
6 months ago
Woman shares travel adaptor hack that legit has shaken us to the core
6 months ago
These were the most popular tweets in Ireland in 2019
7 months ago
The Queen gives out to Princess Anne for snubbing Donald Trump and we can't stop watching
7 months ago
Everyone on Twitter is howling at the new AirPod carrying straps
Next Page