Yaas girl, get it.

If you managed to go through puberty and not suffer from acne, skin conditions, or even just the odd break out, good for you.

You are one of the few people who didn't wake up at least once plagued with worries about leaving the house because of the state your skin.

Chances are those of us who did (or do still) suffer from poor skin, spent hours pouring over skin care websites and aisles in Boots searching for something that'll cover our faces and make us feel even a little bit less self-conscious during day light hours.

Despite the fact that so many people were going through the same thing, the feeling that you were the only person in the world who had ever had acne raged on.

And even if you weren't, the belief that the so-called, elusive, 'pretty people' never had a bad skin day in their lives was always there.

This, of course, was not true - but it's hard to see past your own questionable experience when you're teenager to realise to everybody pretty much goes through the same shitty skin-based crap anyway.

That's why Stacey Solomon's most recent column about her own skin is fairly important.

When you buy a hat thinkin you’ll look like Avril Lavigne in her skateboarding boy hating Hay day and you end up looking like your little brother... 😂 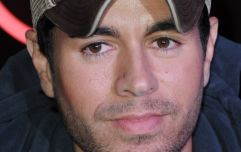 What Ever Happened To Enrique Iglesias' Mole?

END_OF_DOCUMENT_TOKEN_TO_BE_REPLACED

While a lot of us may like to think that we've come to accept how our bodies and faces do or don't look, there are still plenty of people out there struggling to find that ability.

In her column for The Sun, Stacey admits that she never struggled with acne growing up, but that once she hit her mid-twenties, she broke out.

The presenter wrote that she was left with "craters and scars from stubborn spots," that she became paranoid about leaving the house without makeup on, and that having a clear face in front of her boyfriend was "excruciating."

She also admitted something that a lot of people wouldn't - that she still worries about how her skin looks.

Living my best life 😂😂 Can’t tell you how excited I was to become Frenchie for the #KeithAndPaddyPictureShow I apologise in advance for my terrible American accent! 😂😂 14.04.18 @itv 😬😬 #GreaseIsTheWord

"I often rub my hands across my face; feel all of the dents and bumps in my skin and my heart sinks a little," she said.

"It’s terribly superficial and there are much more important things in life to worry about, but it does get to me."

And of course it does - no matter what the abundance of bloggers might say, self-esteem doesn't just appear one day with a new mantra of self-acceptance and a few 100k followers.

It's a long process and some of us may never get there entirely but it's still refreshing to see somebody speak honestly about their attempt, not sugar-coating, not dressing up, and not acting as if they're stronger than they are.

You can read the rest of Stacey's column here.

popular
Expert explains what could have happened to Ireland's beloved Fungie
"He was only in his 40s:" Laura Whitmore reveals cousin passed away from Covid-19
Katie Hopkins refuses to wear a mask on flight from LA to London
The Body on The Cube has finally been unmasked after 11 years
Boyzone's Keith Duffy set to for the next I'm a Celeb Get Me Out of Here
TikTok couple 'alphafamilia' announce they're also step-siblings
Kim Kardashian has six toes on private island with close inner circle
You may also like
3 weeks ago
Win a unique Eminence Organic Skincare Facial and 3 products worth over €350
2 months ago
Get glowing: 5 easy way to improve – and future-proof – your skin
8 months ago
No chemical peel needed: 7 easy ways to achieve the glowing skin of your dreams
11 months ago
Research looked at the effect acne had on people growing up - and it's not good
1 year ago
People are loving this blackhead hack because it works instantly
1 year ago
My Perfectil 90 Day Challenge: How I knew the supplements were really working
Next Page