We reckon there's nothing like a new look to give you a confidence boost after a break-up and Vogue Williams obviously agrees.

The television presenter recently announced the end of her marriage to former Westlife star Brian McFadden and decided to treat herself to a bit of pampering this week.

Williams shared a photo on Instagram of her new do, showing off her lengthy extensions and pink highlights. 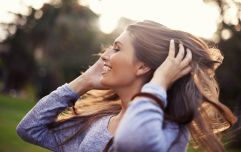 END_OF_DOCUMENT_TOKEN_TO_BE_REPLACED

The couple were married for three years before their shock split and the former Fade Street star admitted it had been a "tough week" since making the announcement.

“The support we’ve been getting from people online has been amazing. Seeing everyone’s kind words has really made a difference in this hard time. We both have great families and friends that are being really supportive too.”

popular
Shawn Mendes (24) is reportedly dating Dr Jocelyne Miranda (50)
Lauren Graham shares who she thinks Rory's baby daddy is
Brighten up your Christmas with these affordable festive lights, coming to Lidl next week
Paula MacSweeney praises healthcare workers after baby boy is hospitalised with RSV
Phoebe Bridgers says Christmas in Maynooth is like a "rom-com"
3 simple tips to get your nails in shape ahead of Christmas
Why Are Men so Obsessed With Boobs? The Answer is Pretty Surprising...
You may also like
1 month ago
Experts reveal how often you should actually wash your hair
2 months ago
'Cosy blonde' is the low-maintenance hair colour we all want this autumn
3 months ago
Autumn vibes: 'Foilayage' is the new hair colour trend we all want now
5 months ago
Going grey? Herringbone highlights are the cool new way to embrace your silver strands
5 months ago
WIN: A hamper filled with hair and beauty goodies for you and a friend
6 months ago
Limp, dull, brittle hair? It might be the water – but this shampoo is a life-saver
Next Page