Can you make it out?

We couldn't at first, but it turns out Zayn Malik's new head tattoo is actually very sweet and special.

The singer debuted his new ink, just behind his ear on the side of his head, last night on Instagram, and at first many people didn't understand what it meant. 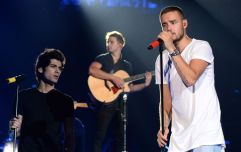 END_OF_DOCUMENT_TOKEN_TO_BE_REPLACED

However, after further investigation, we found out that it's his dad's name, Yaser.

In the post of his new tattoo, he simply captioned it, "Love you."

Zayn recently told Rolling Stone: "My dad's a hard worker and he has strong values. He was a personal trainer and is solidly built, and he used to go on at me all the time about being a good student and getting the right education.

"He wanted the best for me, and I wanted to please him in return. . . . I wanted to show him, as much as everyone else, that I could do it.

"'Man, I know if Dad was to hear me sing like this,' I said to [record producer] Malay one time, 'it would mean everything.'"