10 Things... You Should Never Do In The Cinema

For some, heading to the cinema for a night out can be one of the highlights of the week. For others, it is not such a sacred event. There are certain things that should just not happen in the cinema. Here are ten of them.

END_OF_DOCUMENT_TOKEN_TO_BE_REPLACED

So you haven't seen that friend in quite a while... That's wonderful! Go for a coffee and have the chats! Do not sit in the middle of the cinema and start discussing your life story.

2. Taking out your phone in the screen.

Yes, we even mean if your phone is on silent. The light display on your phone can rival anything that's happening on the big screen. It's completely distracting to everyone arond you. Trust us, you have years to update your facebook. Literally years.

3. ANSWERING your phone in the screen.

However bad texting or updating your phone in a screen is, never, we repeat never answer your phone while in the cinema. "Oh HEY, I'm just in the cinema..." Yes, the dark, quiet cinema. Where no one else is talking. Ever.

There you are, completely engrossed in Godzilla and these vibrations start to occur. No, it's not the thumping of the beast on the screen, it's somebody playing a soccer match with the back of your seat.

Yes, we know the cinema is the kind of establishment where it is totally acceptable to eat popcorn and the like but in the quieter scenes, maybe try to just wait until something loud happens. "You make me want to be a better man..." but all you can hear is crunch, crunch, crunch. 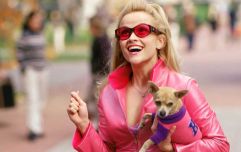 END_OF_DOCUMENT_TOKEN_TO_BE_REPLACED

So you've been on a couple of dates and you're at that stage where you are just all over each other. Then you decide to go see the latest blockbuster on a Saturday night but that's a packed cinema. A packed cinema that is watching and hearing everything you say or do...

When the film says it's starting at 9.10pm, it's not a guideline. That'st the time. Now, you can account for about ten minutes of trailers but why bother going to see a film if you've missed the first ten minutes? Surely you won't have a clue what's going on...

You don't need whatever it is that is in your bag, unless it's absolutely crucial to your existence.

9. Leaving before the end.

We can kind of understand someone leaving half way through the film if it's not their cup of tea but departing before the final scene? Why would you endure an entire film to do that?

We can understand sing-alongs, we can completely get that children want to join in but if it's neither of the above, then no. We love a good sing-song as much as the next person but not in the confines of the cinema.

popular
Kin star defends early criticism of new RTÉ crime drama
Woman claims to have picked up Gabby Petito's fiancé hitchhiking
Princess Beatrice has given birth to her first child with Edoardo Mapelli
Body found in search for missing YouTuber Gabby Petito
Mary Lou McDonald condemns "homophobic" protest outside Leo Varadkar's home
Holly Willoughby launches new lifestyle brand, Wylde Moon
Derry Girls star speaks out after show called "distinctively British"
You may also like
2 weeks ago
"It is really amazing:" The Little Mermaid star gives update on live-action remake
3 weeks ago
Netflix reveals release dates for all of the huge movies still to come in 2021
1 month ago
The full list of all the new shows and movies coming to Netflix in August
2 months ago
QUIZ: Can you guess the movie from its pixelated poster?
2 months ago
Steven Spielberg just signed a massive deal with Netflix
3 months ago
Moulin Rouge turns 20 and Nicole Kidman is just as nostalgic as the rest of us
Next Page