Today, you're all cordially invited to visit Downton Abbey and step back into 1927 with the Crawley family.

Yes - the day has finally arrived. Downton Abbey hits cinema screens across Ireland today following on from the hit TV show of the same name.

Experience the day to day life of the Crawley family and their wreath of staff in an "upstairs, downstairs" period drama that follows the family we all fell in love with since the show first aired in 2010. 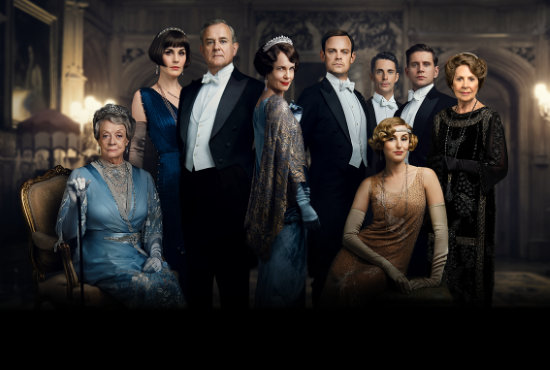 END_OF_DOCUMENT_TOKEN_TO_BE_REPLACED

The movie which lands today (Sep 13) follows the family as they prepare for the arrival of King George and Queen Mary. It is unexpected news that the king and queen are coming to visit the estate and so, there is pandemonium and utter chaos as they sweep the floors and polish the fine china like they have never done before.

I was lucky enough to see the film last week and as a true Downton Abbey fan, I loved it, however, if you've never watched the programme, fear not, although the movie picks up where the series ended it's still completely understandable and fascinating to watch as a complete newbie.

So, if you're thinking of heading to the cinema this weekend, here are six reasons to pick Downtown Abbey.

Think 1920s, think incredible dresses, beautiful head pieces, glamourous tiaras and elegant gloves. Anna Mary Scott Robbins, the costume designer for the movie (and series) pulled out all the stops with this one to make sure the men look as dashing as ever and the women, posied to perfection in threads that'll make you want to return to that era.

END_OF_DOCUMENT_TOKEN_TO_BE_REPLACED

We know that the king and queen's arrival is the key storyline in the movie but, it's the sub-plots which make this movie great. Some of the pivotal characters in the series really get a chance to write their own story in this movie and it makes for interesting viewing.

Dame Violet Crawley (Maggie Smith) brings great comedic value to the film. It might be set nearly 100 years ago but, Maggie Smith keeps the film full of fire and life with her witt and stubbon nature.

END_OF_DOCUMENT_TOKEN_TO_BE_REPLACED

I was in floods. Now, I'll admit I'm a wreck when it comes to an emotional family moment getting played out on screen and so, the scene between Lady Mary (Michelle Dockery) and Violet (Maggie Smith) did not do me well when I had mascara running down my cheeks leaving the cinema.

All the same, it was very touching.

A moment for this man. Mr Tom Branson as he's known in the movie is not only flying the flag for incredible Irish actors in the flick but he's also very easy on the eye and so, you'll be thrilled to know he gets plenty of screentime.

Jim Carter is back with a bang in the movie as he steps out of retirement to resume his role as butler of Downton Abbey under Lady Mary's wishes.

Jim Carter plays the role of Mr Carson and he's the tough love, soft egg character that makes the movie so heartwarming.

The film ends perfectly leaving us to ask, Downton Abbey the movie: part 2?

We'll never say no to more time with the Crawleys.

The film hits cinemas across Ireland from today (Sep 13) and overall, it's a delight to watch - be it on a date or with your mom, perfect escapism like the weekend orders.

popular
Paris Hilton says she was "slapped" and "strangled" as a teen in youth care
The First Quadrillionaire? Paypal Accidentally Gives Man $92 Quadrillion
Former detective chief says Brian Laundrie discovery is "strange"
Someone has ranked the penis size of men from all over the world
Why Are Men so Obsessed With Boobs? The Answer is Pretty Surprising...
8 things we learned about Adele from her 73 questions with Vogue
WATCH: Parents see person walk past daughter's crib in creepy baby monitor footage
You may also like
1 week ago
Another Strictly star has pulled out of the live show
1 week ago
Everybody's watching Netflix's Maid - and for good reason too
2 weeks ago
Squid Game fans spot massive clue in Tug of War game
2 weeks ago
Disappointment as The Den has been cancelled again
2 weeks ago
Why we can't stop watching Squid Game
2 weeks ago
Looks like Irish gangland drama Kin will return for more seasons
Next Page