The signs can often be difficult to spot - especially when you're the one experiencing them.

70% of people have failed to see the signs of coercive control in a new BBC show.

Is This Coercive Control? is a one-off special on BBC Three. Comprised of a social experiment, a group of young people aged between 18 and 30 come together to consider whether they truly understand what constitutes coercive control. END_OF_DOCUMENT_TOKEN_TO_BE_REPLACED

A form of domestic abuse that can involve controlling behaviour, emotional abuse, and financial abuse, coercive control is oftentimes more insidious than physical domestic violence. However, it can still be just as harmful.

So, in order to tackle this problem, UK journalist Ellie Flynn brought a group of 20 people together to watch a dramatisation between Rachel and Alex, a couple who engage in a string of discussions featuring patterns of behaviour used to control and frighten.

After each dramatisation, the group are asked to discuss whether they thought the actions they witnessed constituted coercive control.

In some cases, the vast majority of people failed to notice the signs, and instead believed that what they were witnessing was a nasty argument or comment, instead of something that could be punished under the law.

This unawareness around what coercive control consists of is understandable. The behaviour works to control victims so well because it is not instantly recognisable. Often, a person can be controlled and not realise so until a long time later.

The patterns of abuse can often make it difficult and sometimes impossible for a person to leave a relationship. 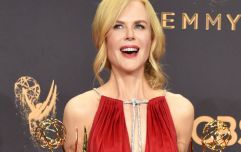 Nicole Kidman's Emmy speech about domestic abuse is SO important

END_OF_DOCUMENT_TOKEN_TO_BE_REPLACED

Feelings of isolation, financial control, or being consistently told that you are not good enough can lead to a victim believing they are dependant on their abuser, and that they need them to survive.

To tackle coercive control, it is important to know its signs - to protect yourself and those closest to you.

You can find more information about coercive control on the Women's Aid website. If you have been affected by any of the issues raised in this story you can contact Women's Aid on 1800 341 900.