Here are the 8 best movies on TV this Saturday

Are you in the mood for movies?

It's Saturday, which means you might have plans, but if you don't have plans... then at least you have movies.

We've put together a list of the eight best movies on TV later today, and there are plenty of top notch options.

The introduction of Chris Evans as Captain America. A nostalgic watch for anyone who has stuck with the MCU down through the years.

Colin Farrell gets trapped in a phone booth. 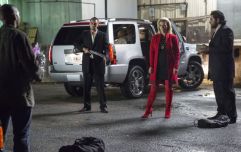 Here are the 7 best movies on TV tonight

END_OF_DOCUMENT_TOKEN_TO_BE_REPLACED

A twisty-turny story about a bunch of magicians with a surprisingly good fast, featuring Mark Ruffalo, Morgan Freeman, Jesse Eisenberg and Woody Harrelson.

One of the more iconic comedies of recent years. Crude and gross and very funny.

Legendary actor Brian Cox stars as Churchill in the tense days before the invasion of the beach at Normandy. A good one for history obsessives.

One of Leonardo DiCaprio's earliest roles. This Boy's Life centres around his relationship with Robert De Niro, who plays an emotionally abusive father figure.

A movie worth staying up late for. The late John Belushi turns in a career comedy performance alongside Dan Aykroyd, with huge guest cameos from the likes of Ray Charles, Aretha Franklin and James Brown.

The pair are a down-on-their-luck musical duo who are trying to save an orphanage.