Saoirse Ronan took over hosting duties on last night’s SNL and it made for a very Irish show with a guest performance from U2.

Yes, the actress made reference to her home multiple times throughout the show, from her opening monologue teaching viewers how to say her name properly, to one sketch in particular that featured the actress playing the role of an Aer Lingus flight attendant.

The sketch was about the cabin crew of an Aer Lingus flight from Dublin to Cork and while it might have gotten a few chuckles from US audiences (only a few, mind), it didn’t go down all that well with Irish viewers.

The sketch quickly racked up a lot of negative comments online with many saying they just didn’t get the punchline.

“Kinda not getting the punchline here, but OK,” wrote one viewer.

“What part of this was supposed to be funny?” asked another.

Yes, the sketch left viewers very confused, with multiple dogs randomly appearing throughout and the obligatory mention of potatoes.

However, the best response came from Aer Lingus themselves.

The airline has since responded to the bizarre sketch with a tweet that paid homage to that from another person who was left scorned by an SNL sketch.

Yes, the tweet is of course copying the one that Donal Trump posted after Alec Baldwin’s killer performance as him shortly after he was elected president. 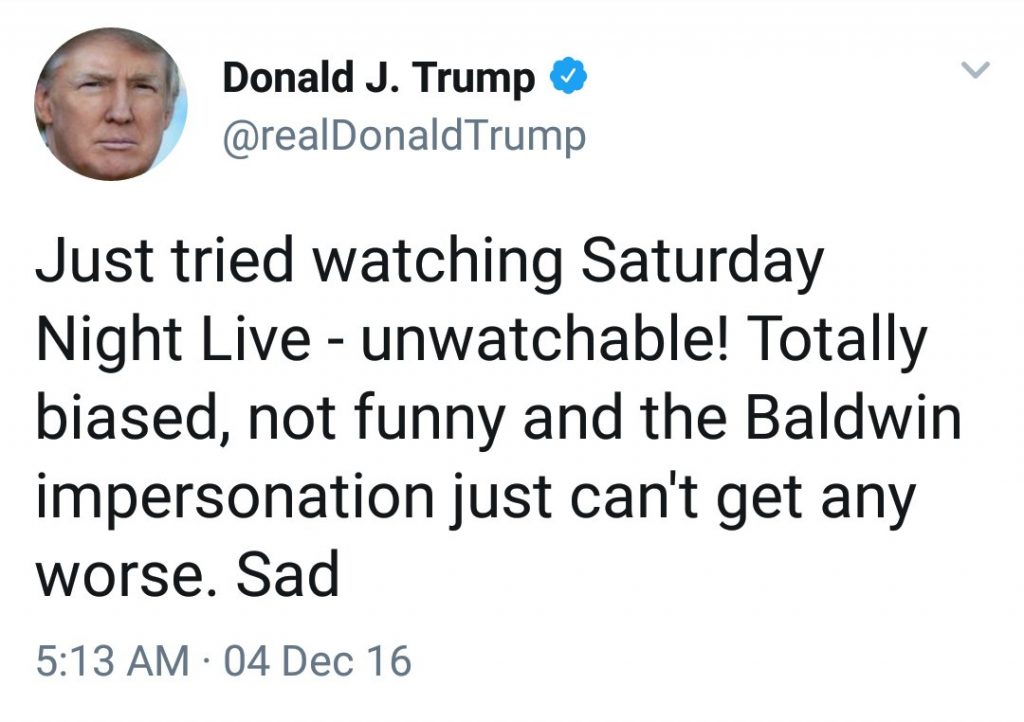 While Aer Lingus might not have found the humour in the sketch, we found it in their tweet – fair play!

popular
H&M to close 170 stores this year due to dropping sales
QUIZ: Can you name the Keanu Reeves movie from just the screenshot?
Womb stories: Bodyform's latest ad is a triumph for women's health portrayal
QUIZ: How well do you remember The Rugrats Movie?
There's a new micro-festival happening in Westmeath this summer
Staycation: 7 gorgeous glamping spots for your Irish summer getaway
8 out of 10 married couples are owed tax back, are you one of them?
You may also like
1 week ago
QUIZ: How well do you remember the very first episode of The O.C.?
1 week ago
Leo Varadkar defends use of Mean Girls quote in Covid-19 speech
1 month ago
Carole Baskin handed control of Joe Exotic’s zoo in Oklahoma following court case
1 month ago
PERSONALITY QUIZ: Which Normal People character are you?
1 month ago
'It's just reminded me how rich Sally's books are': Normal People producers on adapting Conversations With Friends during lockdown
1 month ago
'That’s the most honest answer': Skeet Ulrich reveals why he is leaving Riverdale
Next Page