Dancing On Ice cut short due to injuries and Covid-19

Sore news for fans of the show.

Dancing On Ice has been cut short due to repeated injuries, drop outs, and the coronavirus pandemic.

The finale of this year's ITV reality show had been pulled by one week, the network confirmed today. They released a statement revealing the news this afternoon. 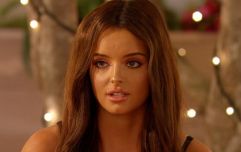 Maura Higgins slams Dancing On Ice scoring ahead of finale

END_OF_DOCUMENT_TOKEN_TO_BE_REPLACED

The finale was originally supposed to air on March 21. It will now be broadcast on March 14.

"ITV have taken the decision to move the final of Dancing on Ice forward by one week," the statement read.

"The competition’s final will now take place on Sunday 14th March. Our production team and cast have delivered a fantastic show during incredibly challenging times. Continuing to make the best TV for our viewers is our top priority and we look forward to the rest of the series, on air from this Sunday at 6pm."

This comes after Dancing On Ice was forced to take a break a few weeks back due to too many injuries.

Jason Donovan, Denise Van Outen, comedian Rufus Hound and The Only Way Is Essex star Billie Faiers were among the stars forced to withdraw from the show due to injury.

As well as that, Emmerdale actor Joe-Warren Plant had to drop out after testing positive for Covid-19 alongside his partner Vanessa Bauer.

Former Olympic artistic gymnast Amy Tinkler and comedian Matt Richardson had both been drafted in to replace the injured contestants, but with too many of the cast injured, the show simply could not go on.

The Dancing On Ice finale will air on ITV on March 14.

Girls With Goals || Her · Ep.160: The Beauty Of Coaching - Hayley Harrison joins us from Sport Ireland
popular
Body found in search for missing woman in Waterford mountains
Queen signs note 'Lilibet' in final goodbye to Prince Philip
Roz Purcell introduces 4 - 30 sizing for new Hike Life collection
WATCH: The trailer for the new Sophie Toscan du Plantier documentary is here
Jockey Lorna Brooke dies aged 37 after racecourse fall
Abducted French girl, 8, found in Switzerland five days after disappearance
Man charged with murder of 24-year-old mother Jennifer Poole
You may also like
3 months ago
Myleene Klass details pain of experiencing miscarriage live on air
1 year ago
Dancing on Ice's Hamish Gaman announces engagement to Amelia Humfress
1 year ago
Caprice Bourret quits Dancing on Ice and releases a statement to explain her decision
1 year ago
Holly Willoughby looked like a full on Disney PRINCESS last night, and wow
1 year ago
Michael Barrymore 'gutted' as he pulls out of Dancing on Ice after breaking his hand
1 year ago
TV duo Holly Willoughby and Philip Schofield respond to reports of a rift between them
Next Page