Disney have shared the first trailer of the live action Lady and the Tramp reboot - and it is beyond adorable.

The reimagining of the 1955 animated classic will land on Disney+ on November 12 in North America. There had been no release date set for Ireland just yet, but we're keeping our fingers crossed it will be here soon enough.

The movie tells the story of a pampered house dog and a tough but lovable stray embark who on an unexpected adventure and, despite their differences, grow closer and come to understand the value of home.

The trailer introduces us to Lady, the lovable Cocker Spaniel who is living a pretty good life with her owner, Darling Dear.

But when Darling and her husband welcome a baby, their life changes drastically - and, through a series of mishaps, Lady ends up on the street in the company of Schnauzer mutt Tramp.

And, of course, it includes that moment with spaghetti.

Instead of using CGI animals in the lead roles, Disney have cast actual good boys and girls - with the title characters being played by Monte and Rose.

Monte was rescued from a kill-shelter in New Mexico before he was transferred to a shelter in Arizona. That's where he as adopted by one of the animal trainers for the film. Tramp will be voiced by Justin Theroux. 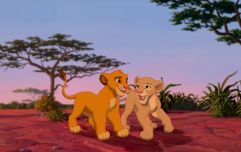 END_OF_DOCUMENT_TOKEN_TO_BE_REPLACED

Tessa Thompson will be voicing the role of Lady, the other half of the iconic canine couple. The part will be played by a Cocker Spaniel named Rose.

Sam Elliott will be playing Trusty, the wise bloodhound, with Ashley Jensen set to play the Scottish terrier Jock.

popular
Casper Walsh from Versatile got engaged this weekend, and the ring is INSANE
H&M to close 170 stores this year due to dropping sales
Glossier: A first-time buyers guide to this cult beauty brand
Someone has ranked the penis size of men from all over the world
James Franco Has Opened Up About His Relationship With Lana Del Rey
Glee Star Naya Rivera Faces Backlash After Making ‘Race’ Joke
Here's what happens on every day of your menstrual cycle (roughly)
You may also like
1 week ago
QUIZ: Can you guess the Disney movie from its opening line?
1 month ago
Baby Yoda-themed Monopoly now exists and the excitement is real
2 months ago
Original High School Musical cast to reunite for Disney singalong
3 months ago
Artemis Fowl to skip cinema release and debut on Disney+
3 months ago
The rumours are true! Meghan Markle IS voicing a Disney film
3 months ago
Disney+ is coming to Ireland this week and here is everything you need to know
Next Page