Even the biggest names in the business can get into trouble, unfortunately for Ed Sheeran.

The pop megastar was hit with a $20 million lawsuit over allegations that he "note-for-note" copied 'Amazing', a song written for X Factor winner Matt Cardle, in his single 'Photograph'.

Songwriters Thomas Leonard and Martin Harrington sued Sheeran, saying in their legal documents: "The similarities go beyond substantial, which is itself sufficient to establish copyright infringement and are in fact striking."

The lawsuit claims that there are 39 identical notes used in each song. 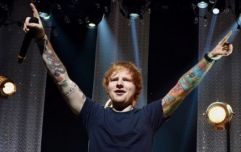 END_OF_DOCUMENT_TOKEN_TO_BE_REPLACED

A judge in California confirmed that the case had been settled out of court. While the details of the settlement have not been disclosed, the damages awarded will likely be substantial.

Copyright is a tricky issue.

Sheeran may not have deliberately copied 'Amazing', but unfortunately intent doesn't matter. If the two songs sounds similar enough, it's still copyright infringement, and you could still end up writing a big fat cheque if your accusers can prove they wrote it first.

So does Sheeran's track actually sound like the one that Leonard and Harrington wrote? Have a listen to this comparison.

There's no denying there's a similarity there, but we'll never know if it was conscious copying or just an unfortunate accident.

Girls With Goals || Her · Ep.161: Feeling Peachy - Sharon Keegan of Peachylean on being an absolute BOSS!
popular
My hair has never been this thick and healthy – and here is what I have been doing differently
The sad reason why viral gymnast, Katelyn Ohashi, isn't on the USA Olympic team
The First Quadrillionaire? Paypal Accidentally Gives Man $92 Quadrillion
Someone has ranked the penis size of men from all over the world
Why Are Men so Obsessed With Boobs? The Answer is Pretty Surprising...
Here's the average age people lose their virginity around the world
Science says this is how many dates you have to go on before you find 'The One'
You may also like
1 month ago
Ed Sheeran reveals that he began Courteney Cox and Johnny McDaid's romance
11 months ago
Ed Sheeran is reportedly expecting a baby with wife Cherry Seaborn
1 year ago
Ed Sheeran donates £1 million to local charities amid #Covid-19 pandemic
1 year ago
Ed Sheeran is taking another break from music
1 year ago
'Emotional' Ed Sheeran announces he is taking an extended break from music
2 years ago
Ed Sheeran has discussed his battle with crippling 'social anxiety'
Next Page