In case you haven't heard, there's a Pretty Little Liars reboot on the way.

A little more than three years after the original series came to an end, 'A' is back to cause more trouble — but this time, for a whole new group of liars.

It was recently announced that Pretty Little Liars: Original Sin has been given a direct-to-series order by HBO Max — and here's everything you need to know about the series.

We're not going to be going back to Rosewood 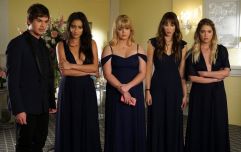 END_OF_DOCUMENT_TOKEN_TO_BE_REPLACED

While we may not be back in Rosewood, we will still be within the existing Pretty Little Liars universe -- and it sounds like things are going to be a lot more dramatic this time around.

"Twenty years ago, a series of tragic events almost ripped the blue-collar town of Millwood apart. Now, in the present day, a group of disparate teen girls — a brand-new set of Little Liars — find themselves tormented by an unknown Assailant and made to pay for the secret sin their parents committed two decades ago...as well as their own,"  the description reads.

And it's not just the town that's changing

I. Marlene King, the original series' creator, isn't involved with Original Sin at the moment — and she thanked fans for all their support soon after the reboot was announced.

The #OGPLL fans are the most passionate, loving and loyal in the universe. Thank you for all of your support. We are family forever. I love you. ❤️ #PLLFamily #OGPLLFamily 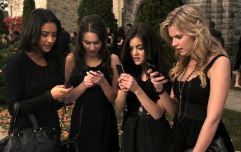 QUIZ: How well do you remember the first episode of Pretty Little Liars?

END_OF_DOCUMENT_TOKEN_TO_BE_REPLACED

Instead, Riverdale creator Roberto Aguirre-Sacasa will be writing the series with Lindsay Calhoon Bring. The pair -- who will also serve as co-executive producers -- previously worked together on The Chilling Adventures of Sabrina.

“We’re such huge fans of what I. Marlene King and her iconic cast created, we knew that we had to treat the original series as #CANON and do something different. So we’re leaning into the suspense and horror in this reboot, which hopefully will honor what the fans loved about the hit series, while weaving in new, unexpected elements," they said in a joint statement.

No cast or release date have been announced (yet)

Since the series was only confirmed late last month, there's no info on who the Liars are or even when we'll be seeing them on-screen.

Well, kind of — it's more of a teaser, although it is a very grim warning from the new 'A'.