The first reactions to the live action remake of Mulan are here - and they're really positive.

The film, which officially hits cinemas in Ireland at the end of this month, is the latest Disney classic to be getting the live action treatment.

And while there are some changes compared to the animated classic - like sadly, Mushu won't be there - people have praised the "exciting" and "vibrant" remake. 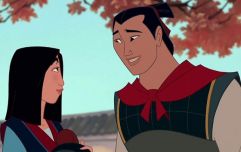 END_OF_DOCUMENT_TOKEN_TO_BE_REPLACED

Following the film's official premiere on Monday night, critics took to social media to share their thoughts - and it looks like it is good news for fans of Mulan.

People praised the 2020 take on the film for its nods to the 1998 animated classic, while one fan noted that it was a "more mature Disney film."

Oh, and one person even said it was "one of the best live-action adaptations of a Disney animated classic".

You can check out some of the early reactions to Mulan below.

I LOVEEDDDD MULAN!!!!! It’s very different but it’s just as good I promise!!! So empowering and so important for the newer generations to see it ???????

#Mulan is one of the best live-action adaptation of a Disney animated classic. It honors the 1998 film and the ballad by modernizing themes of female empowerment and iconic scenes, while also standing out w/ great cinematography & battle sequences are reminiscent of Wuxia epics. pic.twitter.com/2DUjzX1M1h

#Mulan is the best of the Disney live-action remakes since Cinderella — I didn’t even miss the songs. Finds new notes in a story we already know while delivering gorgeous action, heart, and humor. Liu Yifei is ???

I was lucky enough to be able to see #Mulan. And I was shocked by how much I loved it. It delved deeper into classic themes of family & female empowerment than I expected. I cried many times. I felt like my culture was treated with the utmost respect. And the cast was fantastic

#Mulan is a gorgeous film that pays homage to the ballad of its origin, and Yifei Liu gives a fantastic performance.
Songs and Mushu are missed, but other adaptation changes serve the story well and fit the tone. (PS. Yoson An is a great not-Shang & the love story still works.) pic.twitter.com/3ICOKKL2jb

Girls With Goals || Her · Ep.151: 'A Story Shared' - Aoife P. Rafter on blogging during a pandemic and living with CF
popular
Zoe Alexander Says X Factor Made Her Look Like a 'Fool'
"I don’t know where I’d be without her:" Paul Mescal chats new girlfriend in candid new interview
QUIZ: Can you guess the TV show from the kitchen?
The way Diana told William about Charles's affair with Camilla will break you
Ex-housemate has no sympathy for I'm A Celeb's Jordan North - because he let her gerbil die
New image based sexual abuse laws to carry prison sentence of up to seven years
'They're Dead To Me Now' - Kate And Oliver Hudson Have Been Disowned By Their Father
You may also like
2 years ago
A group of friends remade the most iconic Mulan scene and it's perfection
2 years ago
So there is a range of Disney Princess shoes ... and they're magical
2 years ago
The star of the live-action remake of Mulan has been announced
3 years ago
People are raging over this news about the live-action Mulan movie
4 years ago
Jennifer Lawrence being cast as Mulan has caused huge controversy
1 week ago
Spoilers: Grey's Anatomy season 17 premiere brings back OG cast member
Next Page