What are your thoughts?

**WARNING: this article contains many Game of Thrones spoilers.**

Okay so, we're all still on a bit of a come down from Sunday night's episode of Game of Thrones.

It was, to say the least, an intense episode.

Some liked it, many didn't - but you have to admit, a lot went on.

The main points? Well, Cersei is finally dead, as is her brother/ lover Jaime.

The Hound and The Mountain finally came to blows, both plummeting to their death. 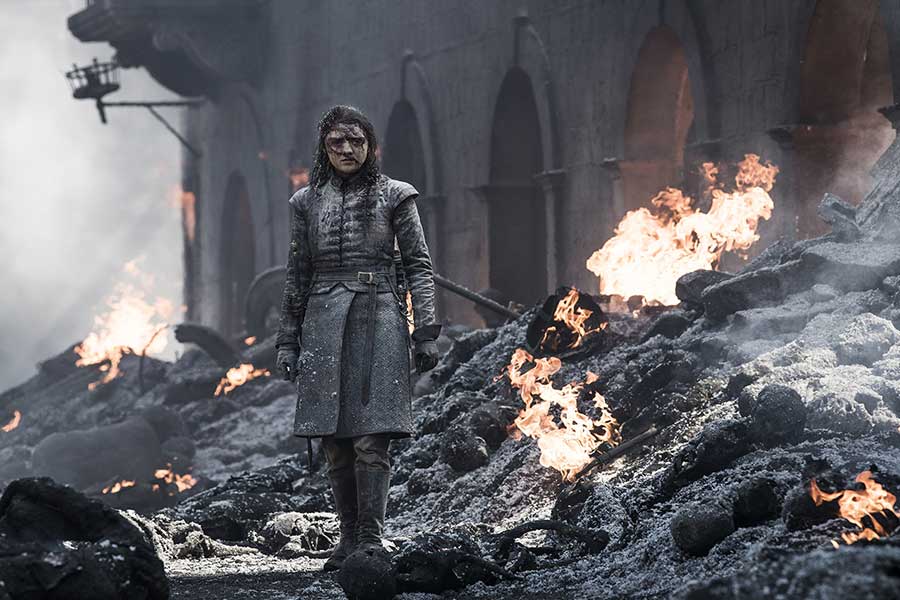 END_OF_DOCUMENT_TOKEN_TO_BE_REPLACED

Anyway, throughout all the fire, murder and war, Ayra Stark was right in the thick of it.

The episode ended with a blood covered Ayra seeing a random white horse, mounting said horse, and riding out of King's Landing.

We were all a bit confused by the horse, but some fans reckon they've figured out the significance.

There was actually some foreshadowing earlier in the episode, with a little girl that Arya was trying to save was carrying a toy white horse.

Symbolism, or a coincidence?

There's also a pretty big theory that the white horse is a biblical symbol proving that Ayra is death.

In Revelation 6:8, which tells the story of the Four Horsemen of the Apocalypse, a passage reads:

"And I looked, and behold a pale horse: and his name that sat on him was Death, and Hell followed with him. And power was given unto them over the fourth part of the earth, to kill with sword, and with hunger, and with death, and with the beasts of the earth."

This actually makes a lot of sense, when you consider Ayra's affiliation with death throughout the entire show.

So basically, people reckon that she mounted the horse to ride off and kill Dany.

There are also people that think the horse was Bran coming to save his sister (he can control animals, remember?)

I suppose we won't really know until next week!

popular
This amazing hanging egg chair is coming into Aldi next week and go, go go (but safely)!
'Completely lost': Model Sarah Morrissey shares touching tribute to mother after recent passing
Richard Corrigan offering €90,000 wedding package prize for one Irish frontline healthcare worker
The Dalkey gaff where Matt Damon stayed during lockdown will be available to rent again soon
Thursday set to be the hottest day of the year, says Met Éireann
After days of silence, Scott and Sofia finally comment on the break up rumours
PSA: White Claw Hard Seltzer is launching in Ireland next month
You may also like
2 months ago
Game of Thrones' Jack Gleeson is making his return to TV
3 months ago
Maisie Williams responds to rumours that Game of Thrones shot an alternate ending
4 months ago
Did you spot the Game of Thrones actor that was in Sex Education season 2?
4 months ago
Game of Thrones prequel House of the Dragon looks set to arrive in 2022
5 months ago
Game of Thrones' Emilia Clarke was 'in hell' while filming Daenerys' final big speech
6 months ago
Game of Thrones fans raging as official Twitter page shares cryptic message
Next Page