Remember Becky the cheerleader from the popular show?

Her sense of humour, witty lines and ability to deal with important issues on the show quickly made her a fan favourite.

Last weekend Lauren's long-time boyfriend Timothy Spear proposed to her with a promise ring in a very sweet way.

The two were sharing a romantic day in the park in Laguna overlooking the ocean when Timothy popped the question.

"He picked out the ring, made payments on it, and then planned the picnic and the moment to get down on one knee to ask her to promise to be his one-and-only and marry him when they are ready," Sinkhorn said.

"Then they watched the sunset together."

The couple have known each other since they were kids and were friends for years before they began dating.

Congratulations to the happy couple! 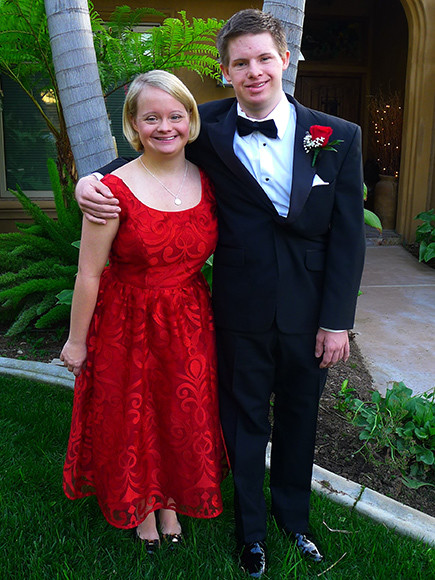 In addition to her work in Glee, the 26-year-old has also starred in Guest Room, a short film in which she plays a young woman facing an unplanned pregnancy.

Lauren is also an advocate for people with special needs working with organisations like AbilityPath, Best Buddies International and Special Olympic.

In 2011, Barack Obama appointed her to the President's Committee for people with Intellectual Disabilities, to advise the White House on related issues.


popular
'Be A Lady, They Said!' You need to watch this incredibly powerful video about being a woman
The comfy €42 M&S boots we're going to be living in all spring
The dress that Holly Willoughby wore this morning is getting very mixed reactions
Netflix's Babies documentary is making quite the impression online
These €20 Zara trousers are seriously comfortable and they come in three colours
Little Fires Everywhere, starring Reese Witherspoon, is set to be your new TV obsession
WATCH: Beyoncé performs at Kobe and Gianna Bryant's memorial at the Staples Center
You may also like
1 day ago
QUIZ: How many of these Derry Girls characters can you name?
3 days ago
QUIZ: How well do you remember the very first episode of The O.C.?
1 week ago
First look at Season 6 of Line of Duty suggests a new character is commanding AC-12’s attention
1 week ago
Sky share the first trailer for Maisie Williams' Two Weeks To Live and we're already hooked
1 week ago
First Dates Ireland are looking for single people to take part in the next season of the beloved show
1 week ago
Line of Duty Season 6 is set to air in Autumn as new plot details are revealed
Next Page