There's not long left to go.

The Late Late Toy Show - which is basically the unofficial start of the Christmas season - returns to our screens tomorrow night.

Tens of thousands of families across the country, young and old, are going to be gathering together on Friday as the festive special begins. 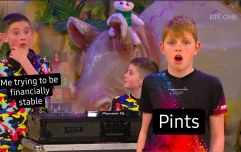 The best memes from this year's Late Late Toy Show

END_OF_DOCUMENT_TOKEN_TO_BE_REPLACED

But it's not going to be viewers in Ireland tuning in tonight, as the folks behind the Christmas extravaganza have made sure that nobody is going to have Toy Show-related FOMO.

Yes, that's right - you can watch it online no matter where you are in the world.

"Living abroad? The @RTEplayer brings a little bit of Christmas magic to you as you can watch the #LateLateToyShow live this Friday night from anywhere in the world," RTÉ wrote on Twitter on Wednesday evening.

Living abroad? The @RTEplayer brings a little bit of Christmas magic to you as you can watch the #LateLateToyShow live this Friday night from anywhere in the world.

The show kicks off at 9.35pm. https://t.co/sPYguUOjhFpic.twitter.com/KV5VKAB4Yo 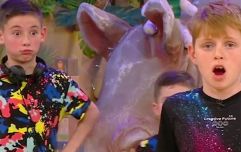 Top 9 moments from the Toy Show we're still talking about

END_OF_DOCUMENT_TOKEN_TO_BE_REPLACED

It comes as the trailer for this year's holiday bonanza was released last week.

Thetrailer features marshmallows, Christmas jumpers and popcorn angels as well as one little boy and his family preparing to settle in to watch the show.

The theme of the show has not yet been revealed and is a closely guarded secret.

Last year's show was the most-watched television programme of the year with over 1.5 million people tuning in to watch The Greatest Showman themed show.

popular
Charlie Bird planning a charity parachute jump
Kylie Jenner fans are convinced she just announced her son's name
President Biden pays tribute after 21 people killed in school shooting
Wagatha Christie: Rebekah Vardy storms out of court just 30 minutes into final day
WATCH: People are losing it over clip of Kendall Jenner trying to climb stairs at Kourtney's wedding
The hottest weekend of the year is only a matter of days away
WHO advisor identifies possible source of Monkeypox outbreak
You may also like
2 weeks ago
Toy Show star Saoirse's family reveal her cancer has come back
4 months ago
Toy Show's Adam King has been named the "most huggable person of 2022"
5 months ago
The Toy Show DJ brothers have been offered their very first gig
5 months ago
Vicky Phelan keeping up with her family Christmas traditions post treatment
5 months ago
Toy Show viewers can't get enough of Finn from last night
6 months ago
WATCH: We finally have a first look at this year's Late Late Toy Show
Next Page