While we know very little about the second instalment of Frozen, we can't wait to see what the Anna and Elsa will be up to.

Earlier this year a online campaign emerged which called for Disney add more diversity and LGBT representation to their films. The hashtag #GiveElsaAGirlfriend became huge on social media.

Tyler Oakley had Idina and her co-star Kristen Bell on his online show on the Ellen network, where he quizzed them about the sequel.

"There's been speculation on the Internet about Elsa potentially being a lesbian,"

"Can you confirm that?" Tyler said to Kristen, who voices Anna.

Kirsten doesn't give away too much but shows her support for the idea.

"Whatever Elsa wants to do is up to her and it's up to us to support her," she said.

Tyler also asked Idina about the rumours to which she said:

"I cannot confirm or deny," she said while laughing. "If I tell you, I would have to kill you."

She adds: "I think in Frozen 1, she was young so she's still figuring stuff out,"

Tyler also played around with a few potential girlfriends for Elsa, throwing around names like Pocahontas and Ursula.

But Idina's choice was too adorable as she picked Tinkerbell as a partner. 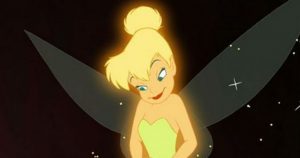 popular
Penneys has a perfect dupe for Charlotte Tilbury's Flawless Filter foundation
Gemma Owen gets to know Jack Keating as her head turns on tonight's Love Island
Airport outfits are all the rage as we head abroad - here are the 4 best ones
So it seems Ekin-Su once competed as Miss Ireland before Love Island fame
WATCH: The moment dad attacks 3-year-old son's suspected murderer in court
Andrew and Dami both steal a kiss on the terrace on tonight's Love Island
We finally know when summer heat will hit Ireland
You may also like
5 years ago
Remember Viktor Krum from Harry Potter? He's unrecognisable these days
6 years ago
Ariel Winter hits back at Instagram body shamers
6 years ago
We've added sarcastic subtitles to popular movies and the results are gas
6 years ago
Former presenter of Art Attack has had a COMPLETE change of career
6 years ago
PIC: First look at Melissa McCarthy back as Sookie in Gilmore Girls
6 years ago
Dionne and Murray from Clueless had a mini reunion
Next Page