Irish short film How To Fall In Love In A Pandemic has been long-listed for an Oscar.

The documentary, by Co. Meath filmmaker Michael-David McKernan, details the experience of a pair of creatives who are pushed together after just two weeks of knowing each other, during a time when people are suppose to be apart.

Premiering at the Galway Film Fleadh earlier this year, the film scooped up the Best Short Documentary award, allowing it to qualify for next year's Academy Awards.

Emerging from lockdown with this... I’m thrilled to be premiering a new film at @galwayfilm in July. How to Fall in Love in a Pandemic is a short documentary that was shot (almost) entirely on an iPhone and shows how you can fast-track matching on tinder to living together. The soundtrack has new music from @daithimusic1 and also features @meltybrains - massive thanks lads. Great to have pal @ste_murray designing this beautiful poster. And the whole project is kindly supported by @artscouncilireland. . This is a pretty personal story and it’s scary to be putting it out into the world - so a huge thank you to those close to me who encouraged the making of this one, especially @mimimw. I hope you can join the online screening on July 10th. . #GalwayFilmFleadh #FilmFleadh32 #irishfilm #filmfleadh

"For me, the Fleadh is the mecca of Irish film and I was so proud to screen alongside some amazing films this year. I can’t wait to see how far this film can travel." 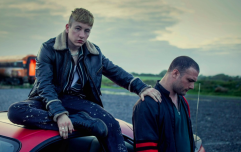 END_OF_DOCUMENT_TOKEN_TO_BE_REPLACED

The film follows Michael-David and Mimi, two filmmakers who meet on Tinder in Chicago and spend a weekend together before Michael-David returns home to Ireland.

Two weeks later Mimi arrives in Dublin for a five day trip, only to find that the country has began closing the economy due to the coronavirus pandemic.

Mimi's return flight is cancelled and she is forced to live with Michael-David indefinitely. Using their phones, they document the acceleration of their relationship during this uncertain time... and try to make sense of their new romance.

A shortlist of films for the Oscars 2021 will be selected in early February, with nominations happening in March.

popular
Cristiano Ronaldo has been called 'racist' for his latest Instagram post
Someone has ranked the penis size of men from all over the world
How to make a woman orgasm (in a few easy steps)
Power ponytails and perfect messy buns! Here's some TikTok hair hacks to try at home
Here's what happens on every day of your menstrual cycle (roughly)
This 'Mississippi Mud Pie' recipe is a must-try for chocolate cake fans
So are we dating?... 10 signs it's time to define your relationship
You may also like
3 months ago
WATCH: The trailer for Pete Davidson's drama-comedy The King of Staten Island is here
6 months ago
REVIEW: Birds of Prey gives Harley Quinn the break she deserves
10 months ago
'A genius at work': Brendan Grace's final performance to be aired in new film
10 months ago
6 reasons to go and see Downton Abbey as it hits the cinema today
11 months ago
Looks like there may be a new Harry Potter film starring the original cast coming soon
11 months ago
Fashion film about Repeal up for international award: 'It goes so much deeper than a slogan on a t-shirt'
Next Page