The Keepers looks set to be our next Netflix obsession

Can you be addicted to something before you've even seen a trailer?

The Keepers centers on the unsolved disappearance of  26-year-old nun and teacher Sister Cathy Cesnik.  The Baltimore nun disappeared without a trace in 1969.

END_OF_DOCUMENT_TOKEN_TO_BE_REPLACED

According to the Baltimore Sun a priest who was on staff at the school at the time of her disappearance has been considered a suspect by police.

Almost 5 decades on, the unsolved mystery remains a topic of conversation amongst the locals in and around the community where Sister Cathy once lived.

In 2015 the world was gripped by the 10 part docuseries 'Making a Murderer'... We became divided into individuals who had seen it and those who were in the middle of seeing it.

We've got a feeling this new show has the same potential.

A full trailer will be released on Wednesday, and the series will premiere on May 19th. 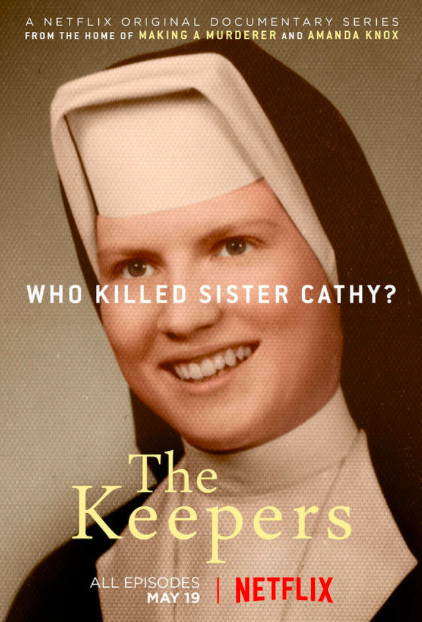 popular
Vicky Phelan says she wants to pass away in holiday home "for the kids' sake"
Rob Kearney and Jess Redden arrive at wedding venue ahead of big day today
Here are the new restrictions being considered for Christmas
Irish man in his 20s dies after being kicked by a horse
These are the most popular baby names for 2021
Nphet recommend concerts to be reduced by half until January
Tributes paid to 29-year-old Irish woman who tragically passed away on holidays
You may also like
2 days ago
A TV adaption of One Day is coming to Netflix
4 days ago
Selling Sunset's Christine Quinn slams 'fake pregnancy' rumours
1 week ago
A true crime doc about the Tinder Swindler is coming to Netflix
1 week ago
Selling Sunset fans baffled over Christine and Emma's past
1 week ago
Personality Quiz: Which Selling Sunset realtor are you?
1 week ago
WATCH: The trailer for Netflix's Anna Delvey series is finally here
Next Page