The show returned earlier this year for its second season to Netflix.

It follows Aziz Ansari's Dev and a host of his mates as they navigate their way through New York City, messy relationships, and questionable dates. 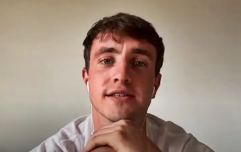 END_OF_DOCUMENT_TOKEN_TO_BE_REPLACED

The series has been highly praised for its inclusive cast, its exploration of diversity in America, and its breaking down of stereotypes.

One episode in particular that stood out from this year's season was 'Thanksgiving.'

Written by Ansari and writer and cast member Lena Waithe, it follows Waithe's character as she settles into her sexuality and struggles to gain acceptance from her family.

Last night, Waithe became the first ever black woman to win an Emmy for outstanding writing in a comedy series.

(She had also been the first black women to ever be nominated for outstanding writing in a comedy series.)

Waithe, alongside Ansari, took to the stage to accept their award, but soon after their arrival, Ansari passed the mic to Waithe.

She started her speech by saying, "Let me reclaim my time. Give me a second."

She thanked Netflix and her girlfriend before addressing the LGBTQ community.

"I see each and every one of you. The things that make us different, those are our superpowers. Every day when you walk out the door and put on your imaginary cape and go out there and conquer the world , because the world would not be as beautiful as it is if we weren't in it.

And for everybody that showed us so much love of this episode. Thank you for embracing a little Indian boy from South Carolina and a little queer black girl from the South Side of Chicago."

The importance of Waithe's speech was not lost on Twitter, as many took to social media to applaud her.

YAASSS @LenaWaithe !!!! FIRST BLACK WOMAN TO WIN AN AN EMMY FOR WRITING IN A COMEDY SERIESSSSSSS #emmys

YES! CONGRATS TO @LENAWAITHE ON HER HISTORIC #EMMYS WIN 🙌🏾 pic.twitter.com/TWuK18Qfcj

Also I love how Aziz stood to the side and let Lena Waithe have her moment #Emmys #BGNEmmys pic.twitter.com/ZHRLCYBjyR

Later on, Waithe also told Buzzfeed reporters that she hoped her win would allow more black women to succeed in the industry.

"I hope it will open up people's eyes to give women of color a seat at the table so they can tell their stories."

Girls With Goals || Her · Ep.153: Scholarship Squad - We chat to Facebook's Claire O'Hara about our Smurfit Scholarship fund.
popular
Irish people urged to send a hug to loved ones on National Hugging Day in aid of Ronald McDonald House
Matthew Perry's dad was a character on Friends and how did we not notice?
Robbie Williams "fairly sick" with Covid while holidaying in Caribbean
Seven Things You May Not Have Known About... Garth Brooks
Gilmore Girls star says he didn't storm the Capitol, praises those who did
Someone has ranked the penis size of men from all over the world
Here's what happens on every day of your menstrual cycle (roughly)
You may also like
3 years ago
Kevin Spacey has Emmy Award revoked amid sexual assault allegations
3 years ago
Handmaid's Tale actress reveals at the Emmys that she secretly got married
3 years ago
Reece Witherspoon and her daughter look SO alike in this Emmys photo
3 years ago
Sofia Vergara brought her son to the Emmys and everyone went wild
3 years ago
Here is what you get inside the Emmys gift bags and it's incredible
3 years ago
Nicole Kidman's Emmy speech about domestic abuse is SO important
Next Page