Long weekend: Netflix has updated its library with some seriously cracking films

It's a good week for cinema releases with Ready Player One, Blockers, Isle of Dogs and Journeyman all being released, but if you fancy staying at home and relaxing, you'll be happy to know that Netflix are adding some absolute belters. Here's our pick of the best new titles.

END_OF_DOCUMENT_TOKEN_TO_BE_REPLACED

Plot: Down on his luck and broke, Lou Bloom stumbles upon the underground world of L.A. freelance crime journalism and a quick way to make cash. As his new business flourishes his desire for success leads him to make questionable moral decisions in order to stay ahead of the game and always be the first of the scene.

Watch it because: It's one of the finest dramas of the decade and features an amazing performance by Jake Gyllenhaal.

END_OF_DOCUMENT_TOKEN_TO_BE_REPLACED

Plot: After the cataclysmic events in New York with The Avengers, Marvel's Captain America: The Winter Soldier finds Steve Rogers living quietly in Washington, D.C. and trying to adjust to the modern world. But when a S.H.I.E.L.D. colleague comes under attack, Steve becomes embroiled in a web of intrigue that threatens to put the world at risk.

Watch it because: Controversial klaxon alert, it's the best film in the MCU. 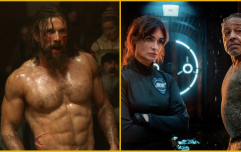 END_OF_DOCUMENT_TOKEN_TO_BE_REPLACED

Plot: Marvel’s Captain America: Civil War finds Steve Rogers leading the newly formed team of Avengers in their continued efforts to safeguard humanity. But after another incident involving the Avengers results in collateral damage, political pressure mounts to install a system of accountability, headed by a governing body to oversee and direct the team. The new status quo fractures the Avengers, resulting in two camps—one led by Steve Rogers and his desire for the Avengers to remain free to defend humanity without government interference, and the other following Tony Stark’s surprising decision to support government oversight and accountability.

Watch it because: It's a perfect balance of characters, plot, and action. That scene at Leipzig/Halle Airport is stunning.

Plot: Raised by her father (Eric Bana), an ex-CIA agent, in the wilds of Finland, Hanna's upbringing and training have been one and the same, all geared to making her the perfect assassin. The turning point in her adolescence is a sharp one. Sent into the world by her father on a mission, Hanna (Saoirse Ronan) journeys stealthily across Europe, eluding agents dispatched after her by a ruthless intelligence operative with secrets of her own (Academy Award winner Cate Blanchett). As she nears her ultimate target, Hanna faces startling revelations about her existence.

Watch it because: The soundtrack kicks-ass but not as much as Saoirse Ronan in the lead role. A ballsy and brave actioner.

Plot: We all know it! Spielberg's classic film set the standard for edge-of-your-seat suspense and became a cultural phenomenon in the process.

Watch it because: It's a masterpiece.

Plot: Depression-era bank robber John Dillinger's (Johnny Depp) charm and audacity endear him to much of America's downtrodden public, but he's also a thorn in the side of J. Edgar Hoover (Billy Crudup) and the fledgling FBI. Desperate to capture the elusive outlaw, Hoover makes Dillinger his first Public Enemy Number One and assigns his top agent, Melvin Purvis (Christian Bale), the task of bringing him in dead or alive.

Watch it because: Michael Mann knows how to shoot a good action set-piece. There's some superb acting talent on show here too.

Plot: Sleazy entertainer Buddy "Aces" Israel (Jeremy Piven) incurs the wrath of crime boss Primo Sparazza when he agrees to testify against the Las Vegas mob. Two FBI agents (Ray Liotta, Ryan Reynolds) have the difficult task of protecting him from a motley assortment of bounty hunters, hit men and nefarious vixens who are converging on his Lake Tahoe encampment to rub him out and collect a hefty reward.

The Hitman’s Bodyguard (Available from 31 March)

Plot: The world’s top protection agent (Reynolds) and his new client: a notorious hitman (Jackson). They’ve been on opposite ends of a bullet for years but now must come together for 24 hours to get from England to The Hague. The only thing standing in their way is the murderous dictator (Oldman) who uses his power to create trouble for the pair at every stop along their way.

Watch it because: Let's be honest. The trailer looked magnificent but after the first reviews came out, people weren't really interested in seeing it. There are some decent moments but it's average at best. This being said, if you love hearing Samuel L. Jackson say 'motherfucker' a lot, this is for you.

Knocked Up (Available from 1 April)

Plot: Rising journalist Alison Scott (Katherine Heigl) hits a serious bump in the road after a one-night stand with irresponsible slacker Ben Stone (Seth Rogen) results in pregnancy. Rather than raise the baby on her own, she decides to give Ben a chance to prove he is father material. However, he is unsure if he is ready to be a parent, and both wonder if they would be compatible lifetime partners.

Watch it because: Despite 1,732 repeated viewings on ITV3, it's still a very good comedy.

Plot: After losing his position as a minor-league pitcher, Montgomery Brewster (Richard Pryor) learns his great-uncle has left him $300 million. To inherit it, Brewster must spend $30 million in 30 days under a complicated set of rules that forbid him from donating too much to charity or retaining any new assets when the period is up. Unable to share details about the will's odd conditions with anyone, Brewster sets out to spend his money under the stern eye of paralegal Angela Drake (Lonette McKee).

Watch it because: It's not Pryor's best work but it still has its moments of genius.

Plot: For the past 60 years, a wisecracking alien named Paul (Seth Rogen) has resided at a top-secret military base in America's UFO heartland. When Paul decides he has had enough of Earth, he escapes from the compound and hops on the first handy vehicle -- a rented RV manned by two British sci-fi nerds named Graeme (Simon Pegg) and Clive (Nick Frost). With federal agents and the father of an accidental kidnap victim on their tail, the two hatch a crazy plan to help Paul return to his spaceship.

Watch it because: Spaceman balls. That's all.

The Other Guys (Available from 30 March)

Plot: Misfit NYPD detectives Gamble and Hoitz (Will Ferrell and Mark Wahlberg) are sentenced to life behind the desk. They hate each other and the monotony of their meaningless jobs, as they’re forced to live in the shadow of the two biggest and most badass cops on the force (Samuel L. Jackson and Dwayne Johnson). But when those guys go down for the count, opportunity knocks for Gamble and Hoitz. Stumbling onto what could be one of the biggest crimes in years, can The Other Guys step up their game to solve the case without killing each other and destroying NYC in the process?

Plot: It's back! Much like Anchorman, Adam McKay's film gets better on repeat viewings. Just remember to "aim for the bushes" when jumping.